St. Mark's Basilica stories and legends you can share at the dining room table!

There’s a very interesting story about how the St. Mark's Basilica got its name and how St. Mark became the patron of Venice.

Being one of the top Venetian sights to see, Basilica di San Marco deserves some admiration from every Mediterranean cruiser.

Some of you will decide just to take photos of St. Mark's basilica from the outside only. Others will go ahead and enter this magnificent cathedral to explore it in detail. on their own or with one of the tours.

Either way, we would like to tell you a little bit about the history and legends of Basilica San Marco in Venice, Italy. Use this knowledge to impress your party when standing looking at the Cathedral on the square or show it off at the dining room table. 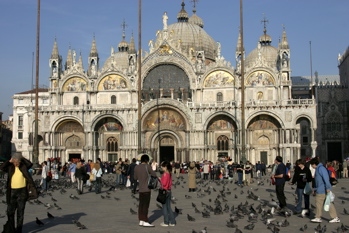 There’s a very interesting story about how the Basilica got its name and how St. Mark became the patron of Venice.

In 828, there were two merchants from Venice who set their sails to Alexandria for business.

While there, they visited the sanctuary of St. Mark, which had held the Saint’s body since his death seven centuries before.

Custodians of the sanctuary complained to the merchants that the Arab governor of Alexandria threatened to demolish the sanctuary and use its marble and columns.

Having heard this, the merchants had the perfect excuse to “save” the Saint’s body from such a threat, and send it off to their native Venice.

If you think that at the time relics were a very important political, diplomatic and economical factor for every city, attracting hordes of pilgrims, you’ll understand why these merchants were suddenly so “inspired” to “save” the body of St. Mark.

To trick the customs officials, who would have never allowed the body of the patron of Alexandria to leave the city, the merchants hid the body in wicker baskets and covered it with pork meat.

As Islamic religion doesn’t favour pork meat, the customs officials didn’t even bother to inspect the goods any further and, holding their noses in disgust, they waved them through.

The voyage back to Venice didn’t lack the adventure factor either, and the sailors were said to have been saved from a storm by an apparition of St. Mark himself.

When the body was finally brought to Venice, it was welcomed by the bishop and the doge who ordered the building of a new basilica to house the body.

The first St. Mark's basilica was built in 828, the same year the body was brought over. It was replaced by another couple of churches until the present day one was built in 1060.

Here's our choice of tours you can book right now to get the maximum out of your visit to St.Mark's basilica: