"Knowing the myth of Athena Goddess makes for a nice story to share with your party at the dining room table the night before your visit to Athens, Greece..."

The story of how Ancient Athens Greece was named goes a long way back to the times when “gods walked the earth” and comes to the present time in the form of a myth.

Knowing the myth of Athena Goddess makes for a nice story to share with your party at the dining room table the night before your visit to Athens, Greece.

The Legend of Athena Goddess

The legend says that Athena goddess of wisdom, war, strength and justice and Poseidon, god of the seas, both wanted to be patrons of Athens city and argued over it.

They were just about to start fighting over the city when Athena goddess came up with an idea: whoever gave the people of the city the best gift would be the winner of the dispute.

Cecrops, a demigod, was pronounced an arbitrator and waited for Athens and Poseidon to come up with something of value for the city. 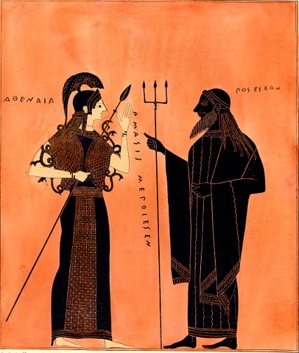 Poseidon offered his gift first: he demonstrated his power by striking the Acropolis with his triton and caused a spring of water to come out. At first, people were delighted but then realized the water was salty, just like the seas and oceans that Poseidon ruled.

Athena goddess was next to show what she had to offer: she struck the ground with her spear and an olive tree grew out of it. This was seen as a much more useful gift as it symbolized peace and prosperity and that was exactly what Athens needed.

Besides, the olive tree was also a source of food, oil and wood. When you climb the Athens Acropolis you will actually see the olive trees on the slope below the Athens Parthenon and you will remember this myth.

Thus, Athena the goddess won and got the privilege of naming the city after herself. 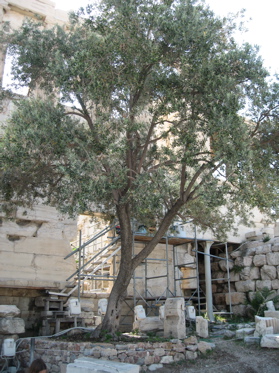 It’s also interesting to know that the temple of Athens Parthenon, the biggest temple on the Athens Acropolis, is dedicated to Athena, too. Namely, Athena never had a lover and was known as Athena Parthenos, “Virgin Athena”. So, the temple Parthenon, takes its name from this title.

Athena goddess is often symbolized by an owl. The owl is a bird which sees clearly at night and is thus associated with wisdom.

That’s why you will also often see the owl on replicas of ancient gold/silver coins sold in jewelry stores in the Athens Plaka! You will also recognize Athena if you remember she is depicted as a young woman wearing a helmet and a shield. 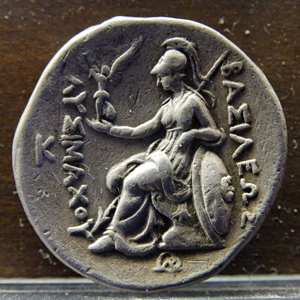 You can find out more about the goddess Athena in The Encyclopedia of the Goddess Athena.