"Capri shopping is famous worldwide - imagine it like Rodeo drive condensed into a couple of medieval streets..."

Maybe you’ve heard it already… and it’s true: Capri is heaven for shoppers! If you go there without money to spend and you are a shopper, be warned… this trip is going to be sweet torture for you!

With little jewels sitting in the shop windows looking like candies, scents of the finest Capri perfumes wafting through the air, with the whole setting so sophisticated and sensual... it’s very easy to start believing Capri shopping is an inevitable activity.

We simply start believing we actually need all these beautiful things… not just need them, it is our natural birthright to have them!

Legend says it is on the isle of Capri where the seducing song of the magic creatures, the Sirens, used to lure the seamen into shipwreck… 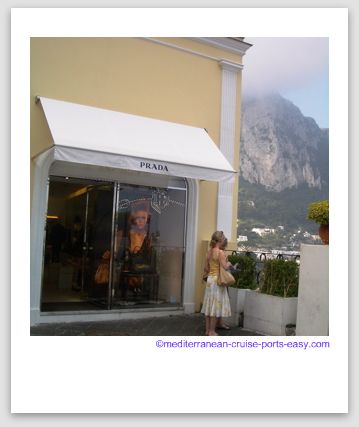 Although we cannot see them anymore, we firmly believe the Sirens still live on the isle of the Capri, it’s just that they moved into the Capri fashion shop windows!

The two streets that promise the sweetest shopping shipwreck in the world are: Via Vittorio Emanuelle and the famous Via Camerelle.

In the 50s of the 20th Ct. the number of Hollywood stars, trendsetters and crowned heads visiting the isle of Capri Italy was growing every summer. And so did the number of stores that wanted to offer them a real Capri shopping experience and something exclusive to take home…

One of the first Capri jewelry stores to cater to high-end clientele was opened by Pietro Capuano, son of a Neapolitan jeweller.

Capuano was an eccentric and bon-vivant who was affectionately called Chantecler (French word for rooster) as he used to show up on the Piazzetta wearing bright red pants.

He partnered with Salvatore Aprea, another young man from Capri with a great passion for precious jewels and one-of-a-kind designs, opened a jewelry store in 1947 and named it Chantecler. 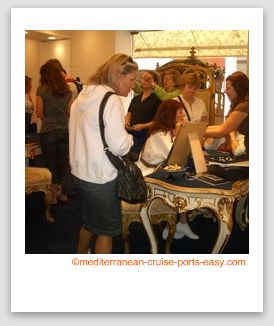 And the rest is history… some of their most faithful customers became Jackie Onassis, Greta Garbo, Ingrid Bergman and many others… From politicians, crowned heads and businessmen to artists and socialites, popping into Chantecler to see the latest collections became a favourite part of their shopping in Capri.

Today, Chantecler makes it possible for every visitor to take home a little bit of Capri magic… in the form of a little bell inspired by the legend of Saint Michael.

Silver, gold, coral, turquoise, ruby or sapphire encrusted, with or without diamonds, the little bells come in different sizes and colours… we’re sure you will find one that will reflect your personality too.

Now that you have satisfied your hunger for things that look good, it’s time to wrap yourself in a cloud of Capri perfumes…

Another legend tells us the story of how the production of natural Capri perfumes started on the isle: in the 14th Ct, Queen Giovanna D’Angio suddenly visited the island and its Carthusian monastery, the building of which she supported herself financially.

Taken by surprise at this unexpected visit, the father prior of the monastery collected the most beautiful flowers growing on the island to welcome the important guest. 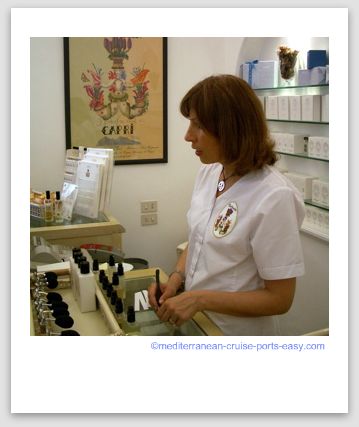 The water in the vase wasn’t changed for three days and when the flowers were finally thrown away, the prior noticed that the water had acquired a fragrance unknown to him.

He went to the father alchemist who traced the exact origin of the smell. That’s how the water became the first perfume of Capri.

In more recent history, it’s been recorded that in 1948 the prior of the Monastery discovered the old perfume formulas. After he had received permission from the Pope, he revealed them to a chemist in Torino who created the smallest laboratory in the world and called it “Carthusia”.

The Carthusia laboratory still exists today and it is an important part of Capri shopping. It’s the fact that the perfumes are made in very limited editions that makes it possible to control the quality of the product… from the flowers and spices being used, to the hand wrapping of each product.

Leather sandals are another must have item that every it-girl thinks of at the mention of Capri shopping.

Soon after, it was a matter of prestige to have your own leather sandals made by order to fit the size and shape of your foot.

Capri pants are another world known item that was made so famous right here on the island. These three-quarter pants were invented in the late 1940s and were heavily promoted by Audrey Hepburn and Jackie O who would come and buy them in stacks from the skilled local seamstresses. 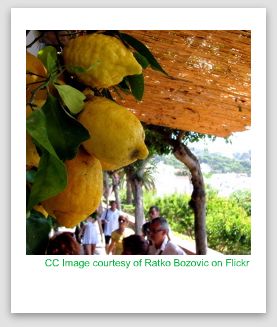 When it comes to Limoncello, a typical lemon liqueur of the Italian south, there are 3 regions that claim to have invented it… Sorrento, Amalfi and Capri.

With everyone’s ‘nonna’ having her own traditional secret recipe for this sweet and aromatic digestive it’s really hard to figure out where it actually originates from.

However, there is one story from Capri that tells us this island certainly spurred its world fame. More than a century ago, there was a lady hotel owner who would always offer her guests a small glass of limoncello as a digestive after dinner. Her guests liked it so much they spread the word of it around the world…

So, be sure to make limoncello part of your Capri shopping experience… and remember it’s best when served chilled! Enjoy!