You will love taking photos at the Ephesus library, just as much as I did when I first visited Ephesus! It is such an impressive building. 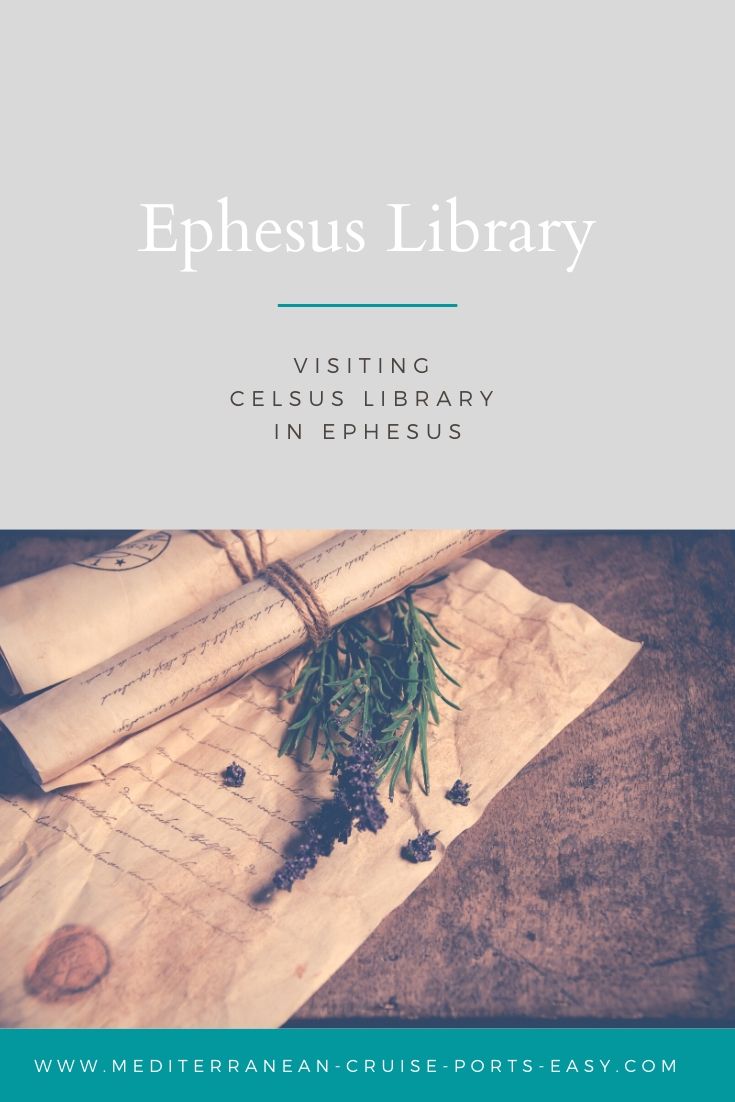 Where was the Library of Celsus built?

Although a reconstruction of the facade that collapsed in the 10th century earthquake, library of Celsus is one of the most spectacular roman buildings to see when it comes to Ephesus ruins, a world famous archaeological remains near Selcuk, Anatolia, Turkey.

And that is only 19km away from the cruise port and harbour of Kusadasi.

The building is situated in the centre of this ancient city, in the area adjacent to the agora.

You are not familiar with this fascinating building? Find out more in this informative video...

How old is the Library of Celsus?

However, what you will se on your daily tours visiting Ephesus, is a reconstruction erected in the 60ies and the 70ies of the 20th century.

The original building was destroyed some time in the Byzantine times. The facade was reconstructed

Why was Library of Celsus built? 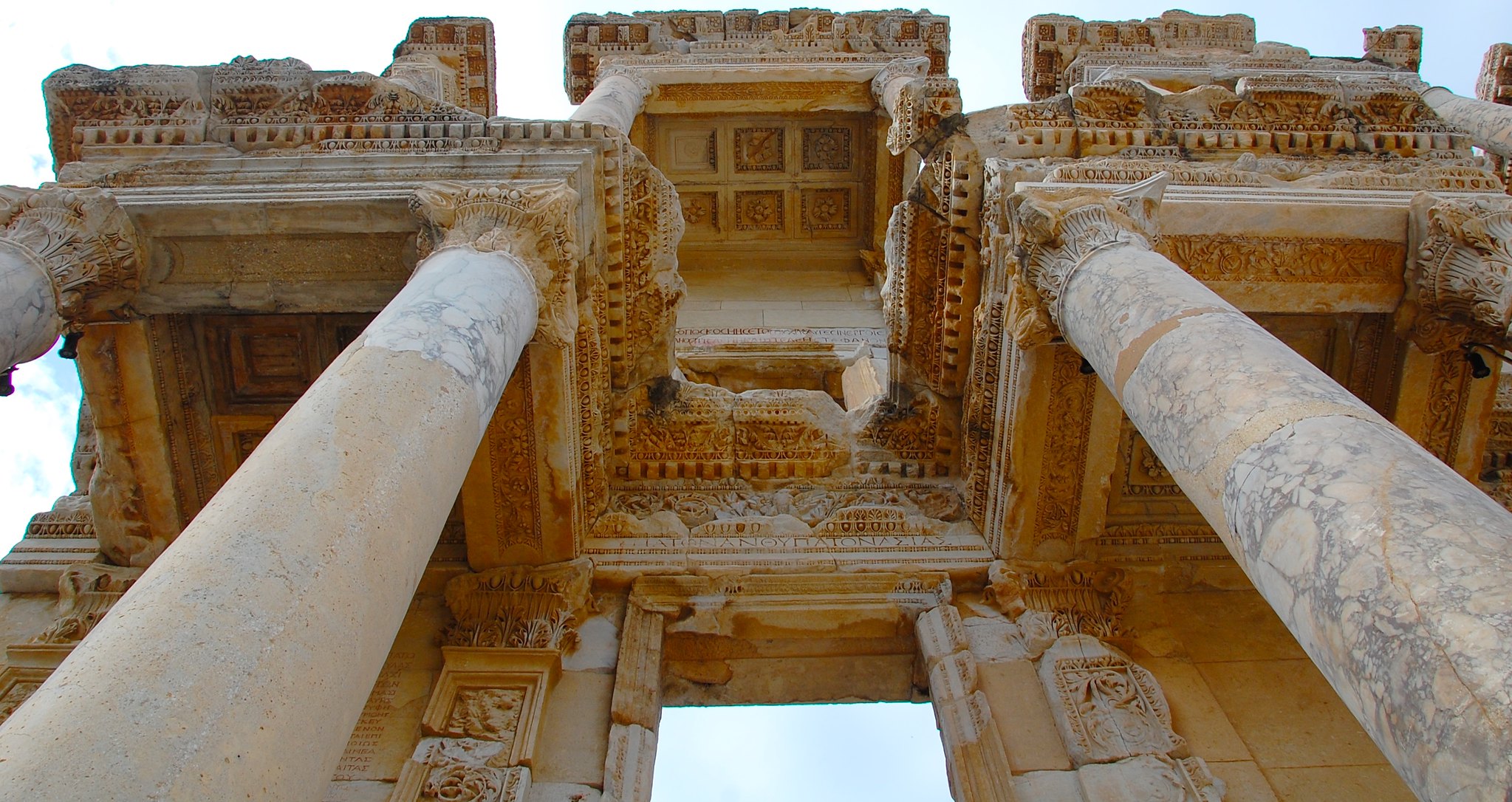 It's the intricate facade that makes the Ephesus Library one of the most impresive Roman buildings; photo by LWYang on Flickr Creative Commons

What exactly was this library used for?

What's really interesting is that this structure is actually a tomb! It was comissioned by Gaius Julius Aquila, consul of the Roman province Asia in 110, to honour his father, Tiberius Julius Celsus Polemaeanus, known as Celsus.

Who is Celsus that Ephesus library is named after?

Tiberius Celsus was a consul governor of Asia and a wealthy and honorable citizen.

It was probably due to his honors and heroic status that he was allowed to be buried within the city limits, which was unusual at the time.

Also, to be allowed this privillege, the tomb had to be built into a monumental building. 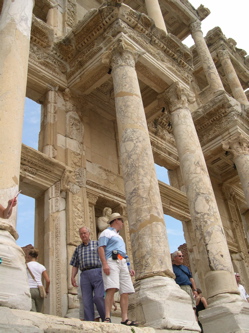 Celsus was burried in a vaulted chamber underneath the central apse at the back of the main reading room. There was a statue of Athena goddess of wisdom standing in the apse.

The chamber could be reached through a corridor at the back of the monument.

The building was completed in 135 AD by Celsus' son Gaius Iulius Aquila.

Ready to book one of the dialy Ephesus tours? There are those that focus on sightseeing and those that also give you time for that fantastic Kusadasi and Ephesus shopping. Pick the one you like best!

How big is the Library of Celsus?

The library had one single room, 17x11m in size.

The scrolls were placed on shelves fixed inside rectangular niches on three walls of the structure.

The niches with scrolls were arranged on three levels. There was a balcony running around the inner wall, on the second floor.

There was a large apse at the back wall and it probably held the statue of Athena.

How many scrolls were there at the Ephesus library? 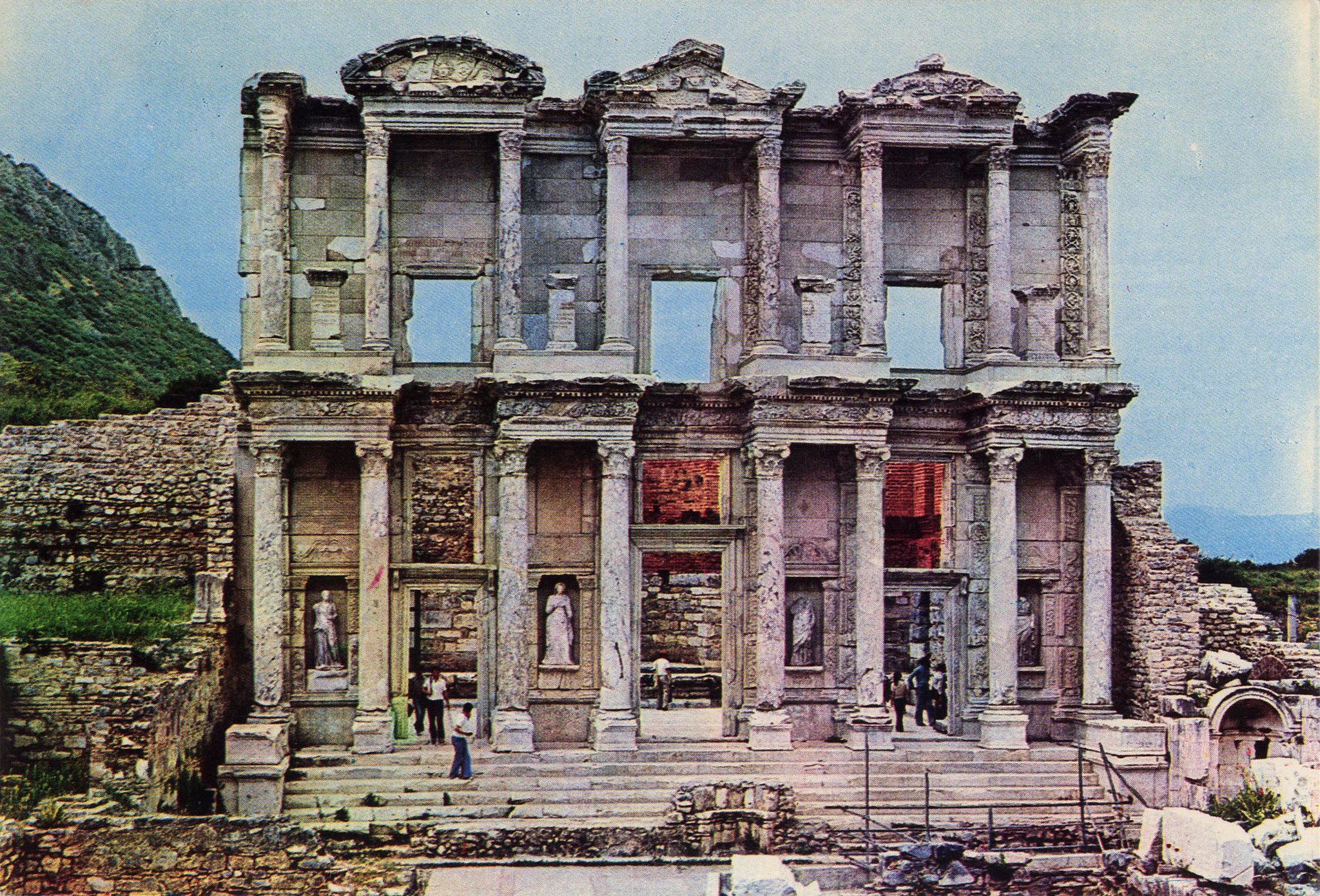 Ephesus Celsus library could house 12,000 handwritten scrolls which were held on 3 different levels of the library. That made it the third richest library of the world after Alexandria and Pergamum.

The scrolls were well cared for, which we know by the fact that they were not kept next to the outside walls. That way they were protected from the outside influences like heat and humidity.

What does the Ephesus library look like on the outside?

The facade of the library has 3 front entrances on the ground level, windows, pairs of Ionic and Corinthian columns as well as niches which once held statues of Wisdom (Sophia), Knowledge (Episteme), Intelligence (Ennoia) and Valor (Arete). These you've seen a hundred times in history books and travel magazines, now it will be exciting to see them in the same spot they had been standing for almost 2 millenia.

Even though the statues you will see in the niches today are copies of the originals which are held in Vienna, it's still an experience.

Ephesus library was burnt down in the 3rd century AD, except for the front wall, and was reconstructed in the 4th century.

Ephesus library was burnt down in the 3rd century AD, except for the front wall, and was reconstructed in the 4th century.

In the late Roman times there was an auditorium right in front of the building of the Celsus Library which was used by politicians, artists, and public speakers.

Eventually, the facade collapsed in the 10th century. It was raised from the rubble by F. Hueber  and V.M. Strocka of the Austrian Archeological Institute between 1970-78.

If you are still not sure how to get from yor cruise ship in Kusadasi harbour to Ephesus, whether to take one of the Ephesus shore excursions or do it independently, read our article Ephesus Travel.

There you will find out about all your options.

If you already understand all the advantages of taking a small group shore excursion (available only online, the ones organised by the ship are big groups), visit Viator's Ephesus pages where you will find a large selection of tours taking you to Ephesus library, at all price ranges.