"Pompeii fresco paintings of Villa of the Mysteries and other Pompeii homes have been wonderfully preserved after the big Vesuvius volcano eruption..."

Walking down the streets of Pompeii, looking at the grandiose public buildings like the amphitheatre, Pompeii baths, temples and buildings in the Pompeii forum is a real experience in itself.

But as you start entering into and exploring Pompeii homes you will be rewarded with a more intimate kind of Pompeii art… Pompeii fresco paintings.

Frescoes in Pompeii were painted in bouon fresco technique, which consisted of painting in pigment mixed with water on a thin layer of wet, fresh lime mortar or plaster. The pigment is absorbed by the wet plaster, when the plaster dries and reacts with air, it fixes the pigment particles in the plaster. When the actual painting was finished, a fine layer of wax was passed over the work.

It’s the infamous Vesuvius volcano, the same one that killed thousands of people, we can thank for the fact we can actually enjoy these today. An ironic testimony to the fragility of human life and the endurance of art, isn’t it?

Although at first it seemed that one of the biggest natural disasters in the history of humankind actually destroyed all Pompeii art, it actually preserved it for posterity and provided modern art historians precious information on the ancient painting and decoration.

Having been buried under layers of volcanic ash for 1500 years, the colours of Pompeii fresco paintings are still unbelievably vibrant today… can you imagine what they were like the day they were created?

One of the colours that strikes us with its vibrancy most is a certain hue of red… Pompeii’s signature colour, now called Pompeii red. 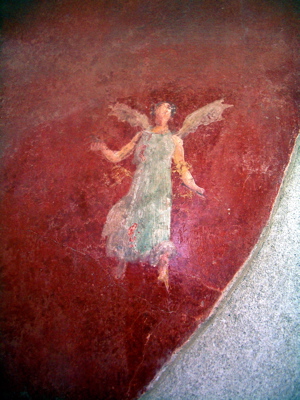 Next, we learn they treated religious and mythological themes with a very earthly approach: ancient gods and goddesses were something that decorated their houses.

The most intriguing example of Pompeii fresco art still today is the frescoes that adorn the famous Villa of the Mysteries’ Initiation Chamber. Still to this day art historians can not agree on the interpretation. To learn more about what their meaning might be read our article Villa of the Mysteries. Pompeii art can be classified into four styles:

1. THE FIRST STYLE: Incrustation style, popular from 150 BC to 80 BC and can be recognized by faux finishes simulating marble. This style emulates the Ptolemaic palaces of the near east where real marble was used. It reflects the spread of Hellenistic culture.

2. THE SECOND STYLE: Architectural style, popular between 80 BC and 14 AD. Uses tromp l’oeil technique - flat images that with the clever use of perspective, trick the eye into thinking it’s seeing a dimensional object. That way, the claustrophobic walls of the room gave an illusion of being open into the outside world, looking onto imaginary scenes.

3. THE THIRD STYLE: Ornamental style, used up to the year 62 AD, which was the year of the big earthquake in Pompeii. This style loses the use of space and architectural features; the space doesn’t open up towards the outside but rather creates the “ picture gallery” effect. Landscapes are shown inside miniature frames inserted into a single colour background. This style is also known for the presence of typically Egyptian elements: lotus flowers, rosettes, small stars…

4. THE FOURTH STYLE: or the Illusionist style of Pompeii fresco art, used from 62 AD to 79 AD, year of the big Vesuvius volcano eruption. This style is a baroque combination of all of the above styles.

A lot of Pompeii fresco art has been removed from the site since the first big archaeological digs in the 18th Ct so as to be protected from looters and the elements. That’s why many of them can be seen in the Archaeological museum of Naples.

Some of those still available for viewing on the walls of Pompeii homes will be protected by plexiglass covering.