"Know what Pompeii ruins you want to see before visiting Pompeii: Pompeii streets, houses, villas and the forum..."

The site of the ancient city of Pompeii is like an outdoor archaeological museum spreading over 163 acres, with 109 acres actually excavated.

We often had Mediterranean cruise guests asking what to expect when visiting the lost city of Pompeii, not really having an idea of how big it would be or how much time to dedicate to it.

Well, the best way to envision Pompeii ruins is to imagine any town of 20,000 citizens in your home area. Now imagine that one day that town gets destroyed in a natural catastrophe.

Two millenia later, this town gets unearthed and you can walk around that ghost town, peek into the houses people lived in, enter the stores, cafes and workshops. How much time would it take you to do it? Probably a day or two.

That's why it's good to get an idea of what the major attractions of Pompeii are and know exactly what you want to see once you get there. That way you can save yourself aimless walking around and wasting your precious time.

As you may know already, the Bay of Naples area is full of attractive destinations that can be visited in the same day as Pompeii. That's why you should limit your time visiting Pompeii to a couple of hours. You can find out more about the destinations to visit on the same day in our article A Cruiser's Day in the Lost City of Pompeii.

The blanket of ashes and pumice kept the ruins untouched for almost 2 thousand years. 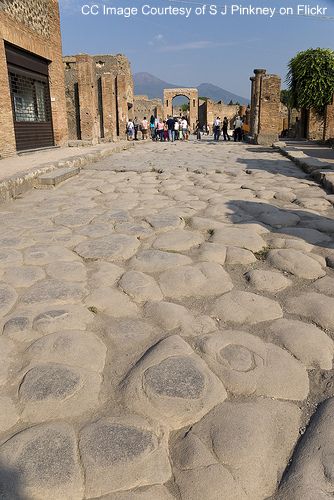 The majority of Pompeii town layout is a regular grid of wider or narrower streets: the east-west running decumani and the north-south running cardi.

Just walking the streets of Pompeii is quite an experience in itself.

What you will notice is that some are built with solid Roman engineering while others are just dirt paths, some are wide just enough for pedestrian traffic only while others can take two carts at a time. Notice the ruts in some streets that are the result of a couple of centuries of cart's traffic.

Also, if you're wandering what the stepping stones are for...well, in those times, when there was no proper sewage or drainage, the streets were full of rainwater, slops, horse manure and human waste being chucked down from the second story windows.

The overflowing water from public fountains was running down the streets to help them keep clean and the stepping stones served to keep your feet dry from it all!

Pompeii and Herculaneum are probably one of the best archaeological sites in the world to experience what a Roman house looked like.

In Pompeii you will have a chance to experience houses that belonged to people from all walks of life: from modest dwellings to magnificent villas embellished with frescoes and mosaics, enclosing inner courtyards with swimming pools, gardens and fountains, featuring central heating and other amenities...

After seeing some of the Pompeii houses, our immediate reaction was: We want a house like that! it's very likely you will react the same way. ;-) Trust us, the old Romans knew what they were doing.

You can read more about these Pompeii ruins, ancient Pompeii dwellings, in our article Pompeii Homes.

Originally, in Roman times, villas were modest houses of farmers in the countryside where wine and olive oil was made.

But with time, it became fashionable for the upper classes to have their own out of town gateway villas, lavishly decorated with frescoes and mosaics.

You will find a number of such suburban villas (meaning they are located outside the city walls) in Pompeii, too.

*To locate Pompeii villas on the map, click the link immediately below it for a larger view with a legend*


View Map of Ancient Pompeii in a larger map

One of them is Villa of Diomedes, which lies on the south side of the Via dei Sepolchri. This villa has a private bath suite and a wine cellar where many amphorae were found.

Villa Imperiale was on the south side of the Via Marina as it approaches Marina gate, right in the shelter of the town walls. This is where The Death of Icarus, Murder of the Minotaur by Theseus and Theseus abandoning Ariadne frescoes can be seen.

In Villa Cicero many frescoes and mosaics were discovered, like The Scene of Street Musicians and the Advice of the Sorceress (Wise Woman and her patients) which can be seen in the National Archaeological Museum of Naples.

Villa of the Figured Capitals or the Villa of the Mosaic Columns got its name from the four columns completely covered in mosaics supporting a pergola in front of a nymphaeum. The columns can now be seen in the National Museum in Naples. There's no directions left in the villa, which is in quite a derelict state.

Villa of the Mysteries or Villa dei Misteri is definitely the most famous villa of Pompeii and one of the most popular Pompeii ruins. It is a well preserved Roman villa some 400m northwest of Pompeii, separated from it by a necropolis and city walls. You can read more about this villa famous for its frescoes in our article Villa of the Mysteries. 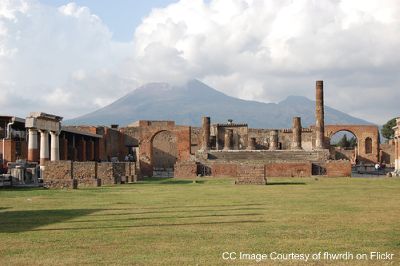 Pompeii Forum is located at the intersection of the two main streets that connected Pompeii to Naples, Nola and Stabiae.

With time, Pompeii expanded and the forum was left on the outskirts but still kept an important role in the political, religious and economic life of the city. You can read about the main square of Pompeii in our article Pompeii Forum.