"Turbulent Taormina history: from the times of building the Greek theatre to Taormina Italy becoming a Grand Tour destination."

Taormina history is perfectly mirrored in the streets of Taormina Italy
... still to this day you can see the Taormina Greek Theatre, Roman age
Odeon and the Baths, buildings built by the Arabs and Normans, there are traces of the Byzantine culture, 18th and 19th Century villas that belonged to European aristocracy… Taormina is a melting pot of Sicilian history.

1) In 832 B.C. – Greek settlers founded a town called Naxos below the Mount Tauro. It was the first Greek Colony in Sicily. Later, the population of Naxos would found what we today know as Taormina.

2) 392 B.C. – Dionysus the Old, the tyrant ruler of Syracuse comes into possession of the Taormina Monte Tauro, sends Andromachus to govern the area, who then founded the city of Tauromenium. Andromachus’ mild way of ruling the town was very different from all the other despots and tyrants of other Sicilian cities. The Taormina Greek Theatre was built in the 3rd Century, under Hyero II of Syracuse.

3) 212 B.C. – the city becomes one of the Roman colonies, a holiday resort for consuls and patricians who built many luxurious villas in this area. In Roman times, Tauromenium was the place where the sea fights took place. Also, due to its strength as a fortress it was a perfect place for sieges in wars and rebellions.

4) During the Byzantine times of Taormina history – Tauromenium became the new capital of Eastern Sicily and the archbishop’s seat.

5) In 962 – the Arabs finally conquer Tauromenium after the 2 year siege and renamed it Almoezia. During this period, the city was very prosperous… oranges and lemons were grown here, philosophy, mathematics and medicine flourished.

6) In 1078 – the Normans conquered Almoezia and now the town was Christian again. During the Norman times, the town continued to flourish.

7) After the Normans – the town was under the rule of the Swabians and also enjoyed prosperity, especially under Frederick II in the 13th Ct.

8) In 1226 – the Pope crowns Frenchman Charles of Anjou as King of Sicily, which the town of Taormina did not like and continued to support the Swabians, although not successfully 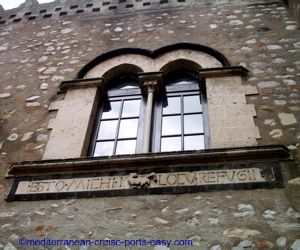 9) Sicily passes into the hands of the Spanish, and Palazzo Corvaja in Taormina becomes the seat of the Sicilian Parliament. This was followed by a few centuries of stability.

10) From 1713 – Sicily is under the rule of the Savoia dynasty, the Austrians, but is back under Spanish rule soon after all the way until 1860. In the 1800s Taormina becomes an obligatory stop on The Grand Tour… to visit Taormina was an absolute must for every upper-class young man.