If you’ve decided to travel to Taormina Italy on the day that your cruise ship is docked in Messina, you will be glad you did.

Apart from being a chic resort town with charming cafes and restaurants, glitzy shops and elegant hotels, you will also have a chance to enjoy some Taormina history.

Taormina is famous for a big medley of different peoples and cultures that once lived here, and most have left some kind of Taormina attractions for us to see today.

We know your day as a Mediterranean cruise guest is short and rushed so here’s the list of must see Taormina monuments for you to follow:

You can locate all Taormina attractions on our
customized Taormina map!

Symbol of Taormina and definitely the most impressive Taormina history attraction is the Taormina Greek theatre.

You can read more about this must see Taormina attraction in our article Taormina Greek theatre.

Situated on the Piazza V. Emanuele, this is the most important Taormina monument from the medieval period.

This tower’s building started during the Arab domination in Sicily, which lasted from the 9th to the 11th Century. It served as part of the city’s defence. 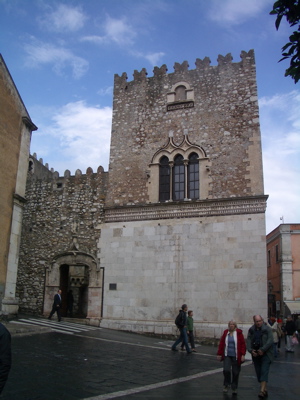 Later, the building underwent some changes: additional wings and staircases were added so the tower could house the Sicilian Parliament in the 15th Ct. Today, the building displays the Arab, Norman and Gothic elements. 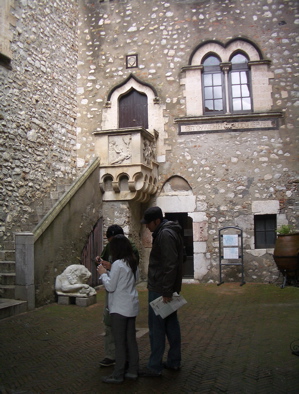 The building was eventually named after one of the most famous and most noble families that lived in Taormina, the Corvaja family, who played an important role in the town’s administration, magistration and arts.

Today, this important Taormina landmark is home to the Sicilian Museum of Art and folk traditions as well as the Tourist Info Center.

“The Duomo” of Taormina will definitely be very different from all the other Duomos you would have seen in Italy and one of the most unique Taormina monuments.

As opposed to the typical decorative Italian Duomo facades clad in multi coloured marbles or ornate mosaics, the Taormina Cathedral looks more like a fortress!

This special church is situated along Piazza Umberto I, which is the town’s main shopping street, and faces the Baroque fountain in Piazza Fontana. It was built around 1400 and has a Latin cross plan with three aisles.

Inside the Cathedral, the famous “non-hand made” Madonna is kept. This is a Byzantine oil painting on panel covered with silver and semi-precious stones. It was found inside the wall, and although the legend says it was placed there by angels it was probably hidden there during the periods of Arab invasions.

This Taormina attraction is very often the meeting point for ship organized shore excursions, so if waiting there for your tour guide to walk you back to the bus, take a better look at it: notice its mythological creatures: ponies, putti angels, tritons and a female centaur!

Maybe you could even sit down on its 3 steps if you’re worn out from all that Taormina shopping. 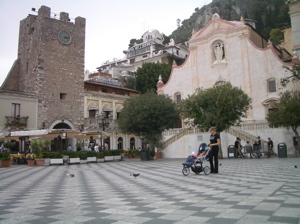 This is definitely one of the most charming spots of the whole Taormina town. Half way down the Via Corso Umberto I, you cannot miss it if you’re coming from the Porta Catania. A beautiful sunny square that’s always full of people sitting in cafes, sometimes live musicians adding to the atmosphere, street artists…

Notice the Clock tower, which once acted as an entrance gate to the part of the city called the “15th Century area”. It was demolished and rebuilt in the 17th Ct. Some say that the foundations of the tower actually date way back to the past. More precisely, to the days of the town’s foundation which was back in the 4th Ct BC. 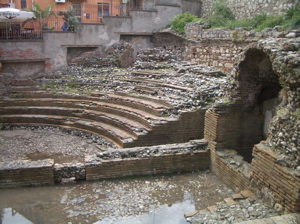 Built in the first century AD, when Taormina was a Roman colony, this structure served as a “small theatre” of the Romand polis.

You can find it some 20m up the side street from the entrance of the Palazzo Corvaia, behind the Church of Santa Caterina. Although you cannot enter it, you can take photos through the fence.

In its structure this theatre is almost identical to the large Greco-Roman amphitheatre but much smaller. Apart from theatrical performances, it was also used for musical recitals and auditions.

A perystil (colonnade) was discovered here which is said to have belonged to the Greek temple of Aphrodite.

Three hectares of these English style gardens are the perfect spot for getting away from the crowds and enjoying some Mediterranean vegetation and the views of Mount Etna volcano and the Ionian coast.

They are known by different names including the Villa Comunale, the Giardino Trevelyan and the Parco Duchi di Cesarò.

The last stamp to the design of the gardens was given by an English woman, Florence Trevelyan, who lived in Taormina at the end of the 19th Ct.

Walking through the gardens you will have a chance to see some caged birds, cottages and towers as well as a collection of some old artillery.

Naumachie is the remains of an old Roman wall, 130 meters long, with 18 niches that surrounded the Gymnasium. Built in the 1st Ct BC, it is, after the Greek theatre, the oldest structure in the town.

In old Greece Gymnasium was used for education of young men trained to participate in the Olympic games, or simply for games and gymnastic exercises.

The name Naumachie, meaning “the sea battle”, was wrongly given to the structure due to the big water basin found here. However, the basin wasn’t used to stage the big sea battles but was just a reservoir used as a water supply for the Gymnasium and the city. 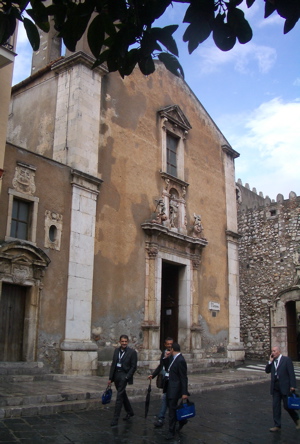 Situated right beside the Palazzo Corvaia is the 17th Ct Chiesa of Santa Caterina. It was partially built on the site of the Roman Odeon and a Greek temple whose walls are built into the side of the church.

Inside the church there are some valuable sculptures and paintings from the 16th and the 17th Ct.

Porta Catania is the city gate at the very end of the Corso Umberto I, and most ship-organized tours will enter the town through this gate due to the fact that there is a large car parking built nearby.

On the other hand, if you’re travelling from Messina Sicily to Taormina by train and taking a local bus from the Giardini Naxos train station, you will be entering through the Messina gate and will shortly find yourself on the Piazza Vittorio Emanuelle, in front of the Palazzo Corvaia.

Porta Messina was opened in 1808 by Ferdinand IV of Bourbon. Porta Catania was last restored in 1404 by the Aragonese, whose coat of arms it carries.