The Temple of Artemis at Ephesus

"Temple of Artemis at Ephesus - unfortunately, today, there isn’t much left from this grandiose structure..."

Two and a half millennia ago, the temple of Artemis at Ephesus used to attract worshippers, peasants, merchants, kings, pilgrims and artisans who all flocked to see one of the Seven Wonders of the World. 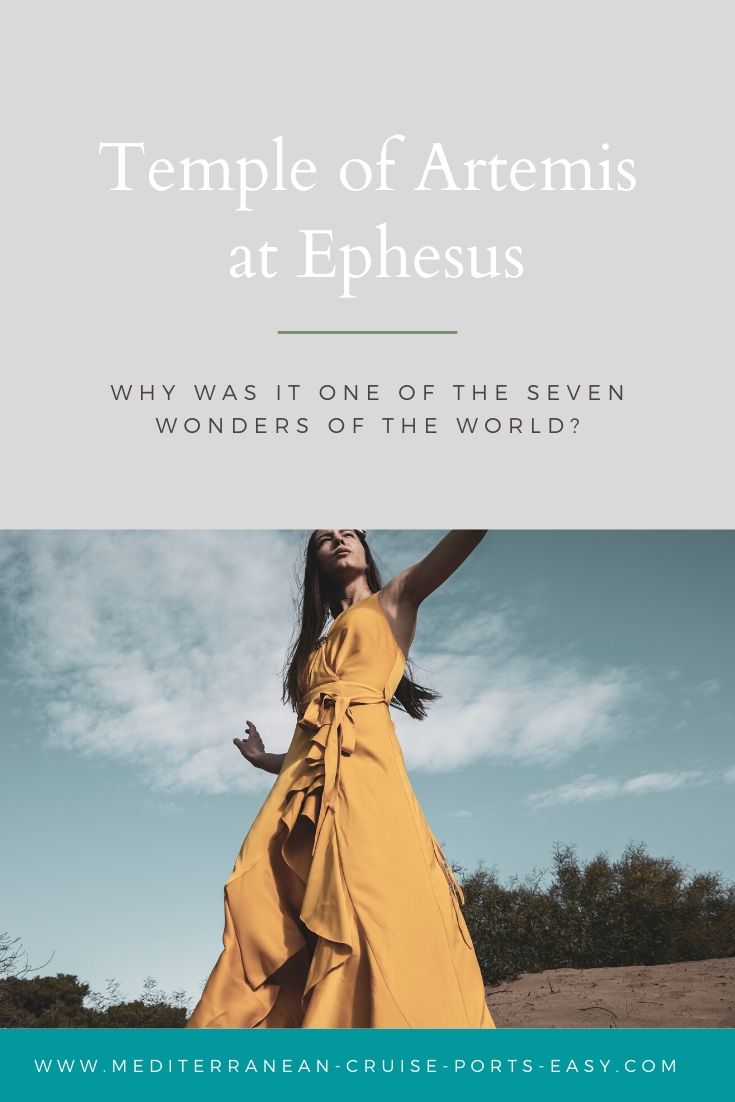 All cruisers need to know before visiting the temple of Artemis

Today, there isn't much left to see of what was once an impressive structure. However, reading this article you will get to understand the importance and splendour of this temple.

12 facts about the Temple of Artemis at Ephesus

1)      It was built in honour of Mother Goddess, Artemis, one of the Olympus godesses, daughter of Zeus and Leto. Find out more about her and the cult in my article Artemis of Ephesus.

6)      Its second destruction was due to fire, set by Herostratus who did it just to be remembered in history

10)   Alexander the Great offered to pay to have it rebuilt if people of of this city put his name on the temple. They refused.

Where is the temple of Artemis at Ephesus located?

The temple, also called Artemisium,  was located near the ancient Greek city of proverbial welth, Ephesus in Asia Minor, near the mouth of Menders river.

It is some 19km away from Kusadasi and your cruise ship. It is one of the spots regularly visited by shore excursions visiting the archeological site of Ephesus.

What did the temple of Artemis at Ephesus look like? 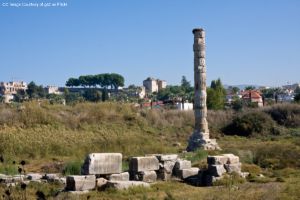 One column and foundations can still be seen at the site

The temple was constructed according to the plans of architect Chersiphron from Crete and his son Metagenes, at the expense of a wealthy king of Lydia, Croesus. Its building was a 120 year long project.

Pliny described the temple as 377 feet (115 meters) long and 180 feet (55 meters) wide, which made it almost 4 times the size of the Athens Parthenon! It housed many fine works of art, sculptures by renowned Greek sculptors, paintings, gilded columns of gold and silver…

Two hundred years after building it, the temple was burned down by a lunatic, who wanted to become famous at any cost, and it happened on the night that Alexander the Great was born!

Curiously, many years later, when the temple’s reconstruction was on course, Alexander the Great offered to finance it. Proud Ephesians answered that it wouldn’t be befitting for one god to help another!

Why was the temple considered one of the Seven Wonders of the World? 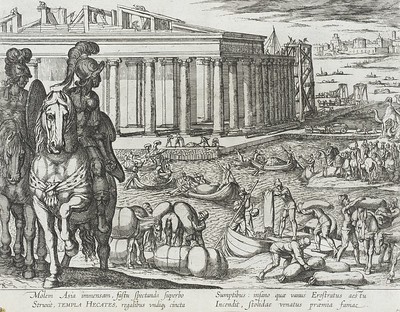 The temple of Artemis at Ephesus in a 17th century etching

It was way bigger in the size than any other temples, including the Athen's Parthenon.

Almost all of it was made of marble, and it is very possible that it was the first temple ever made in marble completely.

Apart from being impressive in size, it was also richly decorated with fine artwork and bronze sculptures.

Pliny says there were four bronze statues of the Amazons (who fouded the temple according to Callimachus and his Hymn to Artemis).

Only marble Roman copies of those bronzes exist today.

Who destroyded the temple of Artemis at Ephesus?

Unfortunately, today, there isn’t much left from this grandiose structure… there is only one column and a few pieces of marble marking the spot!

So, you will have to use your imagination to envision this temple that used to stand south west of the hill Ayasuluk in the vicinity of the ruins.

However, with help of a good and professional tour guide on one of the daily Ephesus tours (remember, they are a must on this day), it will be easy to experience this place to its fullest.

Have you booked your shore excursion yet? Good, now we can carry on.

In 263 A.D. the temple of Artemis at Ephesus was looted and destroyed with the invasion of the Goths.

Although it was reconstructed once again, it started losing its importance due to the spread of Christianity. Throughout the following centuries, its fragments were used as building material. Some of the columns actually ended up in Hagia Sophia!

Today, some of the remains of the temple of Artemis in Ephesus can be seen in the British Museum, as well as in the Istanbul Archaeological Museum.

If you would like to be taken to the temple of Artemis in Ephesus by a private tour guide check one of the daily Ephesus tours we have hand picked for you.

What does the Temple of Artemis look like today? 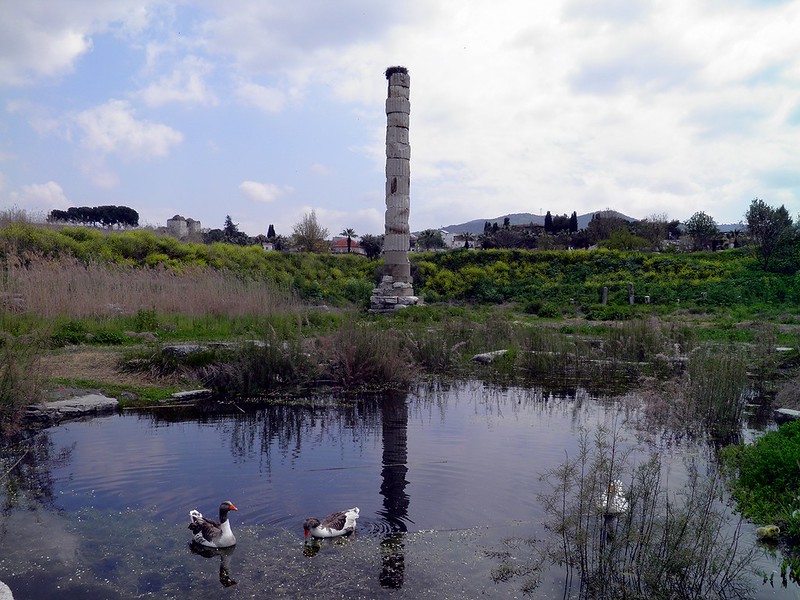 Does the temple at Ephesus still exist?

When you get there, the most prominend thing you'll see is one solitary column standing up.

Still, it's a must see for the fact it was one of the most important structures in history and for a chance of hearing many interesting stories by your tour guide.

Getting from Kusadasi to the temple of Artemis

Artemision is located near the archeological site of Ephesus and is therefore almost always included in shore excursions itineraries.

Taking one of the tours with a professional and well informed tour guides definitely the best way to see it.

Getting there with a taxi and the driver who can hardly speak English won't do anything for you.

With only one column still standing up on the marshy unkept ground, you really need someone who can put things into perspective and describe the temple's glory in the days gone(and that is just one small portion of what you will experience in 5-8 hours long tours).

What you can do is book a tour onboard the ship. Just do keep in mind once you get to do it the tours of your choice could be sold out. Also, you will be sightseeing all day with a full bus of fellow cruisers.

We hand picked the best rated Viator tours that include visiting Artemision and give you a more intimate experience.

Keep in mind there are at least 3-4 cruise ships each and every day in the port of Kusadasi so they do sell out quickly!

1)      Private tour for cruisers: best of Ephesus Tours from Kusadasi Port – this tour leaves early to avoid the crowds, the tour guide is fun, a visit to a leather factory included (no pressure to buy).

The guide meets you at port and arrival back in time is guaranteed.

It is a private tour so it is you that dictates the pace, you don't depend on the group. Check here for more reviews and availabitly.

2)      5 to 6 Hours Small Group ( Max 16 pax ) Excursion to Ephesus from Kusadasi - a professional, knowledgeable guide with great command of English and knows all the tricks of seeing the site before the crowds.

With only a few more people to join you in this small group, this tours feels like a private one. Check here for more reviews and availability.

3)      8-hour Ephesus sightseeing tour with lunch included – first class traditional Turkish lunch, small groups, an informative guide and seeing this site often make this tour the highlight of the cruise! Visit to the temple of Artemis at Ephesus is included. Check here for more reviews and avilability.