Venice Basilica of La Salute- one of the Venice Italy landmarks

"Situated on the left-hand side of the entrance into the Grand Canal, you will instantly recognize the Venice Basilica of La Salute by its grand dome..."

Avid readers of Mediterranean Cruise Ports Easy know that a Venice sail-in is one of the highlights of your cruise. If you still don’t know that, make sure you read about it here first!

But apart from seeing the Doge's Palace and the Piazza San Marco from the deck of your cruise ship, you will also enjoy the perfect view of another important part of the Venice skyline: Venice Basilica di Santa Maria della Salute (Church of Saint Mary of Health), more commonly referred to simply as La Salute.

Situated on the left-hand side of the entrance into the Grand Canal, you will instantly recognize the Venice Basilica of La Salute by its grand dome. 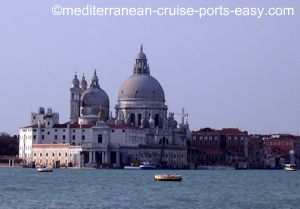 If you look a bit closer to the top of the dome, you will be personally welcomed by the statue of Virgin Mary holding the staff of an Admiral of the Venetian fleet.

If you're wondering what the reason is behind the name of this church, here’s the story: In 1629 Venice had a severe outbreak of the plague, when over 46 000 people died. However, the Venetians considered it a real miracle that only a third of the population died. 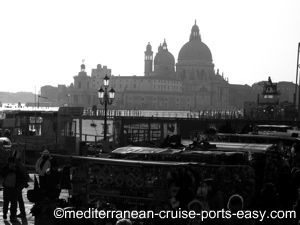 As an offering of thanks for being saved from this outbreak, the Venetian Republic decided to build and dedicate this church to the Virgin Mary, and appropriately named it Saint Mary of Health.

That’s also the reason why most of the art in the Venice Basilica of La Salute refers to the black death (plague).

Construction on the Venice Basilica of Santa Maria della Salute began almost immediately after the disease was overcome, in 1631. It is a Baroque design by a young architect in his thirties, Baldassare Longhena.

The Republic of Venice also decided that besides building this new church as thanks, they would make sure to visit it every year.

Still to this day, every 21st November the people of Venice do just that in a celebration called Festa della Madonna della Salute (Feast of the Virgin Mary of Health).

In this celebration, the city’s officials parade from St. Mark’s square, over a specially built floating bridge across the Grand Canal, to the Venice Basilica of Santa Maria della Salute. There they have a service offering thanks to the Virgin Mary for saving them.

Now, why choose this particular spot to build such a huge church? We often wondered why it was built here of all places. For such a large structure, it almost looks as if it has no sufficient support and could fall into the water at any moment.

But, we found out that the main reason for its chosen setting was so that it was as close as possible to Saint Mark’s square, and allowed easy access when the important processions took place.

The front steps leading to the entrance are spectacular, and they offer you a great opportunity to take the perfect photo with St. Mark’s square in the background. The views from this spot are fantastic and it’s usually not that packed with tourists, so you’ll be pleased to get away from the crowds for a bit.

On the inside of the Venice Basilica of La salute, it houses some beautiful paintings in the Great Sacristy, like the famous “Le Nozze di Cana” (The Wedding at Cana) by Tintoretto, and Titian’s “Cain and Abel”, “Sacrifice of Abraham” and “David and Goliath” on the ceiling.

You’ll also be able to see 120 sculptures. The most interesting being those on the High Altar, depicting Mary answering Venice’s cries and driving out the deadly plague.

Visiting the church is free. Which means you can go and see Titian's Pentecost in one of the church's niches without paying for entrance.

To see the Tintorettos and Titians in the Great Sacristy, you can get a little peak from the entrance or enter it for only €4.

Getting to the Venice Basilica of La Salute 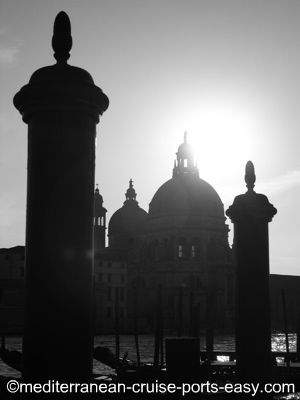 As a Venice cruiser, the easiest way is to reach the area of Piazza San Marco first. There are a few different ways to reach the central Venice area from your cruise ship terminal and you can read all about it here.

From Piazza San Marco, there are a few ways to reach the Venice Basilica of La Salute...