"Lindos town Acropolis - a must see for every Mediterranean cruise guest interested in ancient Rhodes sights..."

With its labyrinth streets, white-washed houses, black and white mosaics and medieval architecture, the little Lindos town is one of the most charming spots on the island of Rhodes.

But there is also a 'cherry on top': perching on the highest point of the 116 meter high bare rocky hill, there is also the ancient Lindos Acropolis.

This place is a big attraction for local tourists and Mediterranean cruise guests alike, which makes it the #2 most visited place on the island, after the Rhodes Old town and its numerous sights.

To reach the steps to the Lindos town acropolis, you need to walk through the town first. At the bottom of the stairs you can choose either to be taken up by donkey (for a charge) or simply walk just like people did in ancient times. 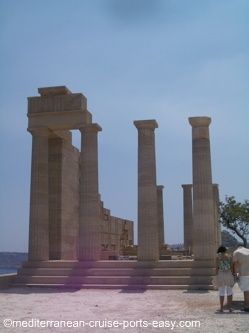 If you decide to walk, on the way up you will be “entertained” by a line of little old ladies that occupy the area, selling lace and trying to engage you in their haggling ritual.

As you approach the top, the first thing you see will be the medieval walls built by the Knights of St. John obstructing the view of the acropolis itself. But the views below will be getting more and more spectacular… 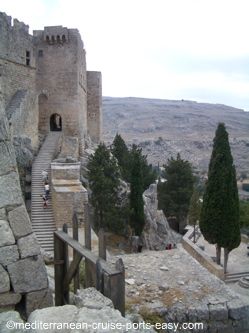 This acropolis was a very ancient place of worship. The cult of the goddess Lindia might have existed here even before the arrival of the Mycenaeans.

It was definitely there before the arrival of the Dorians, who brought their goddess Athena with them. Eventually, Lindia was identified with Athena.

Some say the proof that there was a cult of Lindia before the Greeks, is that the rituals performed in her cult were different from any other Greek rituals.

Namely, there was no fire used in the sacrificing rites of Athena Lindia - only fruits of the earth and bloodless offerings were made to the goddess. Before Athena’s arrival, she might have even been a vegetation goddess who didn’t require animal sacrifice.

The actual temple of Athena Lindia was built sometime between the 5th - 3rd Centuries BC, and that was on the spot of the earlier sacred grove where a holy place full of trees stood and a simple wooden statue of the goddess. 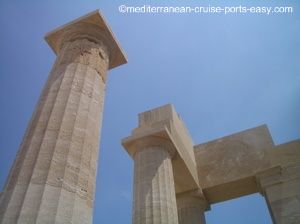 Other buildings on the acropolis dating back to ancient times are:

But as already mentioned, the Acropolis of Lindos town wasn’t only used by Greeks and Romans in ancient times… it was also used as a fortress in Byzantine times, during the period of the St. John’s knights and during Ottoman rule. 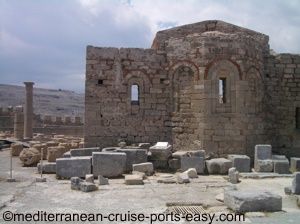 That’s why on the Acropolis you will also see…

As a cruise guest, your time in ports of call is very limited and do not waste it on trying to find your way around on your own, or trying to figure out or depend on local public transportation.

That is why, if you intend to visit Lindos town Acropolis, the most effective ways would be:

If you are taking a taxi or a rental car, plan your visit to Lindos Acropolis very early in the day (before 10 am), before all the tour buses get there. Except on Mondays when the Acropolis opens up in the afternoon only!

Remember that Lindos town is always a few degrees hotter than Rhodes Old Town, so make sure you have enough bottled water with you and hydrate!

NOTE: There are no provisions for the disabled to climb the Acropolis.