"Destruction of Pompeii was caused by the eruption of Vesuvius Volcano eruption, which buried the town of Pompeii under layers of ash in two days and left it forgotten for the next 1500 years."

The destruction of Pompeii is one of the biggest and most blood chilling natural disasters in the history of humankind.

The main culprit, Pompeii volcano Mount Vesuvius, exploded on the 24th August 79 AD, with a force that shot molten rock twenty miles into the sky at the rate of 100 000 tons per second.

To see the dense black cloud of ash from Vesuvius eruption dimming the daylight, to hear the volcano rumbling, watch the avalanche of hot ash, pumice and rock fragments rushing down the mountain at the speed of 100km/hour, flowing over the vegetation and all the structures in its way… must have been a horrifying experience in itself!

More so, if you were one of the 20 000 citizens of the ancient city Pompeii, a Roman town only about 8 kilometers (5 miles) away from the Vesuvius volcano.

The big eruption of 79 AD was actually preceded by a powerful earthquake that took place in 62 AD and caused a lot of damage to Pompeii and other towns in the Bay of Naples. That’s why, when the 79 AD destruction of Pompeii took place, not all buildings in Pompeii were restored.

The earthquake that preceded the destruction of Pompeii was a sign of the steam and gases building up inside Vesuvius, but in those times people didn’t see this as a warning sign of an imminent major disaster.

A couple of days before the big Vesuvius Pompeii eruption, small earthquakes started occurring but the citizens of Pompeii didn’t really take notice. Namely, the people of Campania were quite used to frequent tremors. According to Pliny the Younger, the only eyewitness of the Pompeii volcano eruption who had left a surviving written document of the destruction of Pompeii, the eruption lasted for two days.

It was in the middle of the day of the first day that the Vesuvius volcano exploded throwing up a column of molten rock into the air, which then began to fall and cover the area with ashes.

It was only then that the people of Pompeii and Herculaneum started to run for their lives, trying to escape the wave of heat, the poisonous gases and the fine ashes (pyroclastic flow) that choked or incinerated them. Also, many died from collapsing roof slates and large rocks thrown out by the volcano. 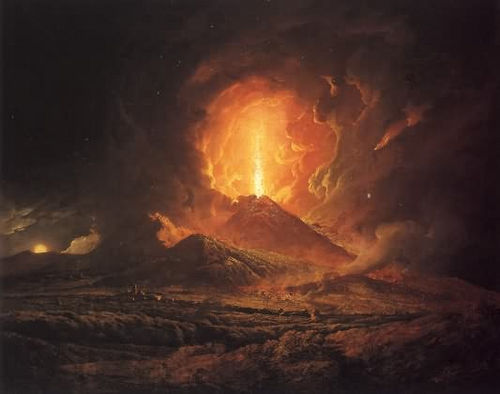 The Vesuvius volcano flows literally altered the landscape, including the coastline. So much so that Pompeii was neither on the Sarno river nor was it by the sea any longer.

Even the looks of Mt.Vesuvius itself changed due to this strong eruption… the way its summit looked was completely changed.

Light tremors could be felt all that time during the Pompeii destruction and there was even a mild tsunami in the Bay of Naples that didn’t significantly damage the coastline.

By the time the volcanic activity ceased on the evening of the second day, Pompeii was buried in 4-6 meters (up to 20 feet) of ash and pumice. Only the tops of the buildings could be seen and the survivors gave up trying to recover the city. So it stayed like that, buried and forgotten, for the next 1500 years.

It is not exactly known how many people were killed by the Vesuvius eruption, but by 2003 around 1044 casts were made from the cavities left from the bodies that disintegrated within pyroclastic deposits in and around Pompeii. Scattered bones of another 100 people were found.

As ash and pumice were falling over several hours on the day of the Vesuvius eruption, most people did have enough time to escape. It seems it was mostly those who were trying to save their possessions and those that hid in the sealed rooms that got killed in the Pompeii destruction.