'Mykonos Greece island must have been a popular getaway for Delian citizens, as Delos was a sacred island on which no one was allowed to be born or die'

1. The earliest history of Mykonos is veiled in a lot of mythology, which is not at all strange considering we’re in Greece, the birthplace of many myths and legends.

According to a myth, this is where Hercules killed the powerful Giants who were real troublemakers on Olympus and angered all the gods. It was decided they should be disposed of. 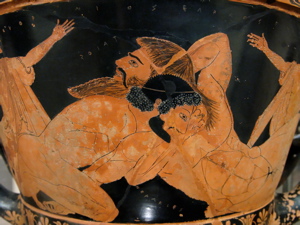 Hercules managed to drag a few of them all the way to the island (they were invincible while they were at home, Olympus) defeated them and the big rocks you can see scattered around the island are their petrified bodies, it is believed.

2. There is also an interesting myth regarding the name of the island… it was named after a local hero and the island’s first ruler Mykons, the son/grandson of Apollo. Because of this, the island was often called “the island of the light”.

3. The first settlers of the island are thought to be Carians from Asia Minor, in 6000 B.C.

4. During the fourth and third millennium BC, Mykonos was part of the distinctive civilization called Cycladic culture, which was spread around the Cycladic islands centred around the sacred island of Delos. This culture was distinct for its female idols and figurines sculpted in stone.

5. Ionians were the next ones in the line of the island usurpers, some time around 1100 B.C. It was also under the Ionians that the neighbouring island of Delos flourished.

Only 2 km away from the island of Delos, Mykonos was its important supply point. Knowing that Delos was a sacred island on which no one was allowed to be born or die, Mykonos must have been a popular getaway for Delian citizens! 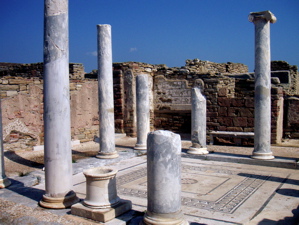 Your day in the town of Mykonos is always long enough to visit the island of Delos, the most attractive archeological site around. Most people will take morning tours which get them back to Mykonos town by lunchtime.

Noone wants to miss the fantastic opportunity of visiting Delos, of course, and that is why shore-excursions to Delos often get sold out on cruise ships.

Luckily, there is an always and alternative to cruise ship organised tours so check out the tours below I have picked for you (I always pick out different price-points as I want to make them available to everyone):

6. In the following centuries, the island was ruled by the Egyptians, Phoenicians, Cretans, Persians and Romans.

7. After the fall of the Roman Empire, the Byzantine Empire took over. It was during all these centuries that the island of Mykonos was a favourite target of pirates that operated in the Aegean.

To protect themselves, the people of Mykonos built the whole town like a maze. The pirates would get completely disoriented in it and then the locals would attack them.

8. In 1206. The Venetians took over and built a castle for its protection, the remains of which can still be seen on the hill above the Mykonos village of Ano Mera. In almost 300 years of their rule, they converted most of the island to Roman Catholicism.

9. In 1537 Mykonos came under the Turks. It was during the Turkish domination that Mykonos became a base for Greek pirates. They fought for the Greek independence (finally obtained in 1830) by attacking Turkish navy and merchant ships.

10. After a tough period of starvation inflicted by German occupation, Mykonos rose again in the 50s, since then tourism has been on an upswing.