History of Pompeii - Pompeii before the Vesuvius Volcano Eruption

"History of Pompeii – what was happening with Pompeii before the Vesuvius Volcano eruption that turned it into ruins."

Everyone knows about Pompeii through the infamous 79 AD Vesuvius volcano eruption. But do you ever wonder what it was like before this town became the lost city of Pompeii?

Here’s a little rundown of the history of Pompeii before it turned into ruins: Most digs of Pompeii go down to the street level of the 79 AD eruption, but the old layers showed that this city was founded some time between the 8th and 6th Ct. BC.

The area around the ancient city Pompeii had been used as a port by Greeks and Phoenicians even before the town was founded here.

Although most towns in Campania were founded by Greek colonists, people that founded both Pompeii and Herculaneum were the Osci, Italic people of central Italy. 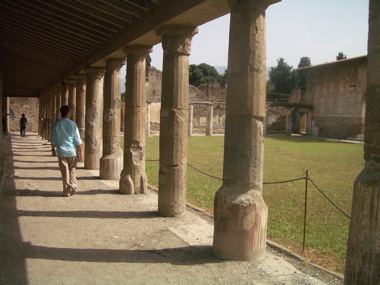 The town was founded on the lava terracing formed centuries earlier that shows us that the city had suffered from volcanic activities long before the big eruption. Thanks to that, the soil around Pompeii was very fertile, which contributed to the rapid development of agriculture.

The Oscan village of Pompeii near the mouth of the river Sarno soon fell under the influence of the Greeks who lived across the bay from the 8th Ct BC.

A new change in the history of Pompeii came when the Etruscans came into Campania in the 7th Ct BC. Some Etruscan inscriptions were found here as well as their necropolis dating back to the 6th Ct BC.

Their influence remained strong, until their power was destroyed by King Hyeron of Syracuse. At the end of the 5th Ct BC, Samnites conquered Campania, and enlarged the town of Pompeii. By the time of the 4th Ct BC, Pompeii was fortified. Its name was first mentioned in 310 BC.

In the 4th Ct BC, at the end of the Samnite wars, the whole of Campania and Pompeii fell under the influence of Rome although it maintained its linguistic and administrative authority for some time.

In the 1st Ct BC, Pompeii joined other Italic cities in the revolt against Rome but was besieged by the Roman general Sulla in 89 BC. It became a Roman colony as punishment for taking part in the war against Rome.

That was the moment in Pompeii history when it had lost its authority: Latin language replaced the Oscan as the official language. All the institutions and culture in general became Romanized too.

At that point, Pompeii became an important port for the Romans: from there the goods were sent on to Rome and the rest of Southern Italy. That contributed greatly to the development of the city that soon became one of the favourite resort towns for wealthy Romans.

That’s why in the 1st Ct. BC Pompeii was a very lively town with many baths, theatres, restaurants, shops and lavishly decorated Pompeii homes. 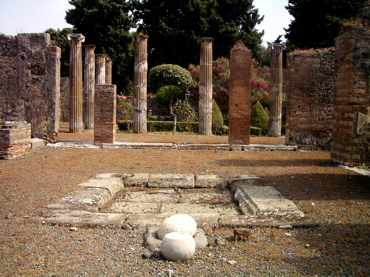 The first sign of the biggest disaster in the history of Pompeii to come, happened in 62 AD, when a big earthquake took place.

Many houses, bridges and roads were destroyed. Actually, the destruction was so large that at the moment the big Vesuvius volcano eruption happened, most buildings were still not rebuilt completely.

People of Campania were so used to tremors that they didn’t really associate the earthquake with the possibility of Vesuvius erupting soon.

That’s why, in August of 79 AD, the people of Pompeii were taken by surprise… in only 2 days the town was completely buried in a thick layer of volcanic debris and became the lost city of Pompeii for the next 1600 years until it was rediscovered. You can read more about what happened exactly in those two days in our article Destruction of Pompeii.

Head on over to the Mediterranean Cruise Ports Easy page on Facebook and become a fan.

You will receive notices whenever something new is added to the site and never miss a thing!

Feel free to leave comments on the page and interact with other fans, Post your photos and any other links that might interest our visitors too!