"Mykonos attractions - on this island, no culture-loving cruise guest will stay disappointed."

Although famous for the sun and sandy beaches, sizzling nightlife and world-class shopping, in Mykonos, no culture-loving cruise guest will stay disappointed.

The small village of Hora (Chora) is the proud owner of 5 Mykonos attractions - Mykonos museums in which you can get a more rounded picture of the island's history and Cycladic islands in general.

Archaeological museum is the most notable museum on the island. It is situated in a neoclassical building close to the commercial harbour of Mykonos.

It is actually very close to where the cruise line organized bus drops you off when you are getting from the port to the village of Hora.

In the museum you can see different artefacts from Mykonos, Delos and the neighbouring island of Rheneia: sculptures, pots, statuettes, jewellery, copper pots, crockery, ancient vases and tombstones. 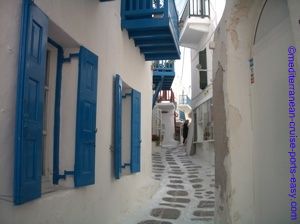 But the most noted treasure is definitely a clay vase dating to the 7th Ct. BC. The reason why it’s so special is that it shows the oldest graphic record of the Trojan horse!

Folklore museum is also known as the museum of Popular art and is located in the 18th Century mansion in the Kastro (castle) area of the Hora village. It will be easier to locate if we tell you you’ll pass it by on the way from the waterfront to the Paraportiani church.

In this, one of the Mykonos attractions, you will see a collection of ancient and modern furniture, post-Byzantine sculptures, photographs, tools, ceramics and musical instruments.

Lena's house is a branch of the Folklore museum situated next to the Maritime museum.

Lena’s house is a completely restored traditional 19th Century Mykonian middle-class home open to the public. Here you can see furniture, artefacts and every day use items. 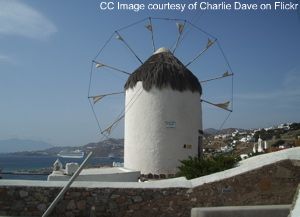 Agricultural Museum is also a branch of the Folklore museum but located in one of the famous windmills, the 16th Century Bonis windmill, which still maintains its original interior. It is situated on the upper eastern section of the town, by the Upper windmills.

This is the only mill on the island that used to be used for grinding grain and is still functional.

In the museum, you can also see tools and other means of food processing in history: a winepress, a traditional oven, a stone water tank, a wood-burning stone oven etc.

This museum is the newest one of the attractions, founded in 1985 to celebrate the history and evolution of Greek merchant ships, from the pre-Minoan era to the 19th Century.

You can see both the indoor and the outdoor displays of ship models, naval documents, ancient coins depicting naval scenes, old anchors and naval charts.

The Naval Museum is situated in the center of the town, near the area Tria Pigadia, in a private house which once belonged to a 19th Ct sea captain.

To locate the museum click here to check the Mykonos map.

From MYKONOS ATTRACTIONS to HOME PAGE