"Piazza San Marco... the place around which everything revolves in Venice".

Piazza San Marco, also known as St. Mark’s square, is the central landmark of Venice, so famous that when you’re in the square you won’t see any sign with its name on it.

Being the biggest and the most important open space in Venice, and the place where all the most important civil and religious ceremonies took place in the past, Piazza San Marco is the only square that earns the title of a piazza.

All the others, obviously so insignificant in Venetian’s eyes, were simply called a campo.

For you as a cruiser, it will be very easy to reach Piazza San Marco from the cruise ship.

Whether you’ve decided to take a cruise ship organized shuttle boat, or take a vaporetto ride down the Grand Canal, you will get dropped off very close to this square.

If you decide to walk all the way from the cruise ship with a little help of the new Venice people mover, just follow the signs that direct you to St Mark’s square.

If you really don't like wasting any time and want to get from point A to point B as soon as possible, especially if you are staying in Venice and have all your luggage with you, we suggest you pre-book your private water taxi transfer to Piazza San Marco.

No matter how you choose to get to San Marco in Venice, we suggest you visit it as early in the day as possible.

The optimal time is from 9 am - 10 am. At that time, shops and cafés won’t be open yet and there won’t be crowds.

That way you will get some nice shots of the architecture and will be able to walk around without having other people walk through your photos, without being attacked by pigeons or stumbling upon them.

After that, branch out to other parts of Venice or to the island of Murano where there’s not as many crowds around noon and walking around is much more enjoyable.

Now if I tell you, that every day in Venice there are around 59 000 visitors (which includes cruise ship passengers, day trippers and hotel guests) and each one of them will want to visit San Marco piazza sometime between 10:30 am and 2 pm, you will understand why we suggest you avoid the area around Piazza San Marco at that time of the day.

For people watching and cappuccino sipping, return later in the afternoon! 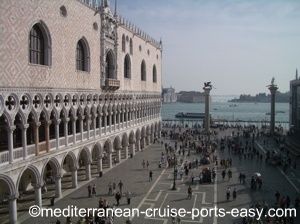 If you approach Saint Mark’s square from the water, you will first enter into the so called Piazzetta San Marco.

The Piazzetta is the area in between the Doge’s Palace and Sansovino's library.

This has always been the doorway to the piazza.

Something you can't miss while walking into the area are the two imposing columns, one with the winged lion of Saint Mark’s on it and another one with Saint Teodoro standing on top of a sacred crocodile of Egypt. Both of them being patrons of Venice.

Dining room table tidbit: Curiously enough, the columns were brought to Venice as part of the loot from the Orient. Originally, there were three columns but one fell into the Venice Grand Canal. The other two first lay on the ground for well over 100 years until it was figured out how to hoist them into their current position.

The area between the two columns was the only area in Venice where gambling was legal. It was also a spot where executions were held. 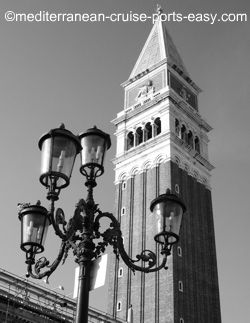 Carry on walking through the Piazzetta and now you’ll be entering the real Piazza San Marco.

The place around which everything revolves in Venice.

A grandiose space so away from any kind of motorized traffic… perfect for socializing, gathering, talking and people watching.

A space made for you to slow down and stop… rest from the usual touristy rushing around.

As you walk into the area, Basilica San Marco will be on your right.

It’s interesting that the lowest point in Venice is in the area of Piazza San Marco, and that’s right in front of the main door of the Basilica. This area will be the first to flood during aqua alta.

To your right will be St Mark’s campanile which is the Bell tower of the Basilica. It is a 98,6 m (323 ft) tall brick structure which was built in its present form in 1514. However, what you see today is a replica of that original structure.

The new campanile was built and inaugurated in 1912.

By now you must be right infront of the entrance of the Basilica di San Marco, admiring its mosaics and cupolas.

On your left hand-side is the Clock Tower (Torre dell Orologio).

When you think that this clock mechanism was built back in the 15th Ct, you cannot but think – at that time, people must have considered it nothing short of a miracle! 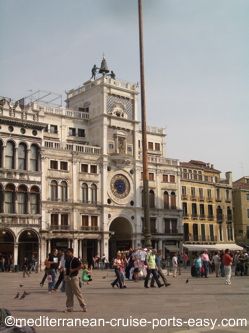 The clock’s mechanism shows the time of day, the dominant zodiac sign and the moon phase. Also, note the two giants on top who strike the bell on the hour. Made of bronze, they quickly tarnished and are since then known as “Moors”.

Back in the day this clock mechanism was so important for conveying the power of the Venetian republic.

That’s why the old legend says that the Senate had its makers blinded upon completion of the clock so they couldn’t go elsewhere and build such a marvelous piece of work ever again.

The other famous buildings to note in the Piazza San Marco are the Procuratie.

These are the buildings that encircle the square and were built to house the offices and apartments of the procurators of Venice. Procurators were the most important citizens of Venice after the Doge. 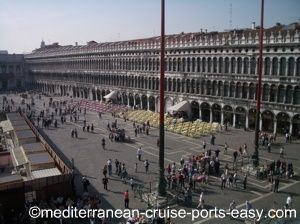 If you turn your back to the Basilica San Marco, on your right will be the Procuratie Vecchie (the Old Procuracies). They were originally built in the 12th Ct but rebuilt after the fire in the 16th Ct into the 3 storey structure you see today.

On your left will be Procuratie Nuove (the New Procuracies) built in the 16th and 17th Ct, while at the very bottom of Piazza San Marco is the wing built by Napoleon.

Today, part of the Napoleonic wing and the Procuratie Nuove house the Correr Museum.

Now that you’ve taken note of all the major sights to see in Piazza San Marco, you are ready to flee from those crowds and return to Piazza San Marco in the afternoon to soak up its unique atmosphere!

If you would like to learn more about it from very informative and friendly locals, see the Basilica di San Marco and combine everything with a gondola ride, check our suggestions here...

1. Small Group Venice In a Day with Basilica San Marco and Doges Palace plus Gondola Ride