"What you'll notice immediately is that Pompeii homes were very different from the houses built today..."

Roaming through Pompeii ruins, the rooms, courtyards and gardens of Pompeii houses are definitely one of the things that will bring you closer to the people of the ancient city Pompeii and the way they lived.

What you'll notice immediately is that a Pompeii home was very different from the houses built today.

Rectangular in floor plan, they were centered around the inner courtyard...all the rooms were facing onto it, and had no window opening towards the outside of the house.

But let's walk you through a typical Roman and Pompeii home of those times: when facing the house facade from the street you would first notice the house most probably had two storeys. On the ground level of the house, opening to the street, were the tabernas or shops.

In between them, there would be the main entrance into the house, the vestibulum, that leads into an atrium or the formal entrance hall, surrounded by smaller rooms.

This is where the guests and clients would wait for their reception by the patron of the house. The main feature of the atrium was the impluvium or the shallow pool, which collected rainwater through the opening in the roof.

The atrium was often surrounded by the tablinium or the reception room, triclinium or the dining room and other small rooms and bedrooms, the so-called cubiculum.

The second part of the room was centered around the open garden surrounded by a colonade or peristylium.

Around the perystilium, there were the bathroom, the cucina or the kitchen, storehouses and sometimes workshops.

This type of house we find in ancient city Pompeii was just perfect for the Mediterranean...centered around open courtyards, it enabled its inhabitants to spend a lot of time in the open and enjoy the mild climate.

When you see the Pompeii ruins, you will notice that the Pompeii homes have different names. Often, those refer to different pieces of Pompeii art: Pompeii mosaics, Pompeii fresco paintings or statues found in them.

Here's a few of the most prominent ones:

View Map of Ancient Pompeii in a larger map 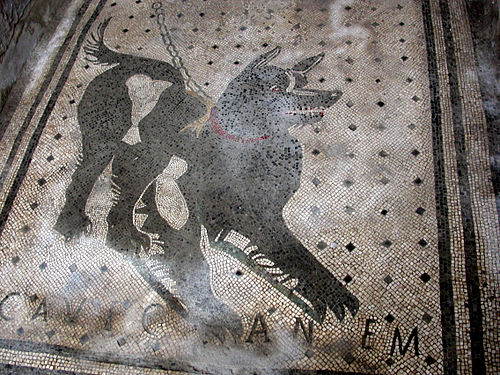