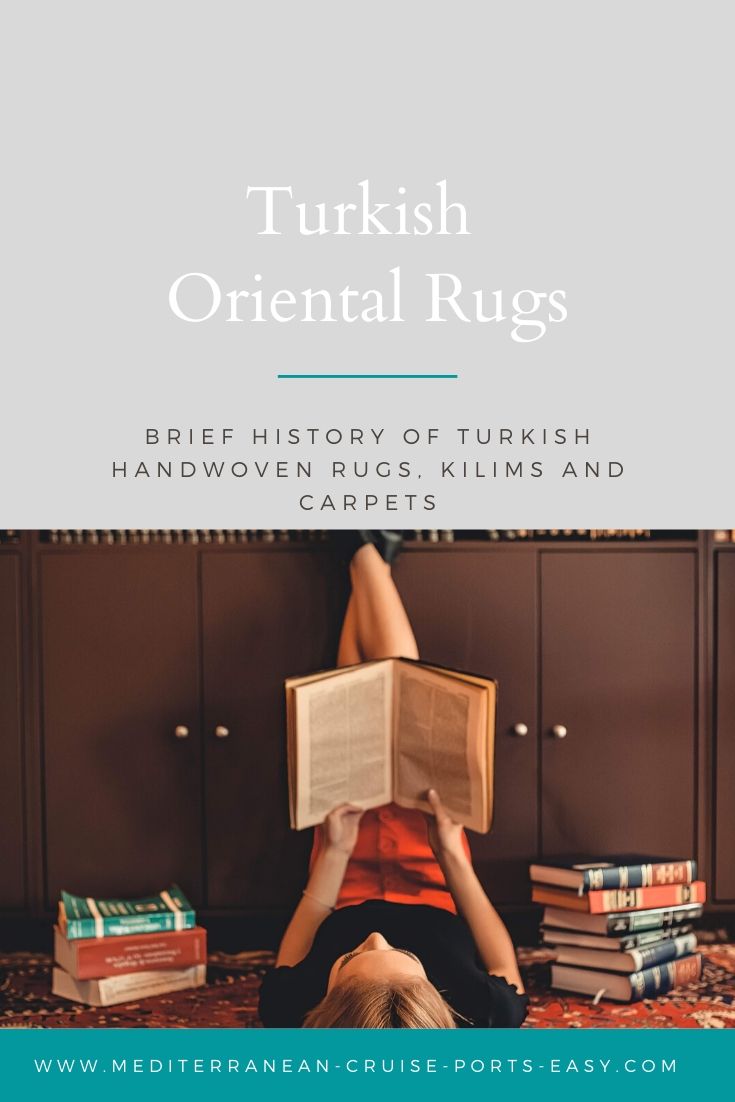 Excited about getting your Turkish rug? Visiting Kusadasi shopping area, you will find yourself in one of the biggest carpet buying hotspots of Turkey. Besides taking one of the Ephesus shore excursions or daily Ephesus tours, shopping for rugs will be the most exciting part of your day.

In order to be able to appreciate them, it's good to know a few basic facts of Turkish rugs history.

Here's a great little video that will give you a great overview of how rugs came about:

Namely, it was nomadic tribes in central Asia that were the first people to use early weaving techniques and that was as early as Neolithic age, 7000 BC!

The first weaving technique used was similar to today's Turkish kilim rugs or flat weaves, which have a warp and weft but no pile.

Those first woven objects were created out of pure need, not desire to decorate, really! They were simple utilitarian objects like cradles, bags, blankets, salt bags, and grain bags.

Also, the Turks have always lived in a temperate zone and used the woven carpets to protect their tents from the cold: they would use them to cover the floors, the walls, and tent openings.

One of the important moments in history of these artefacts was the discovery of the so-called Pazirik rug from the 5th century BC. It is the oldest known rug created in the technique of double knots, which is how all Turkish rugs are made today. 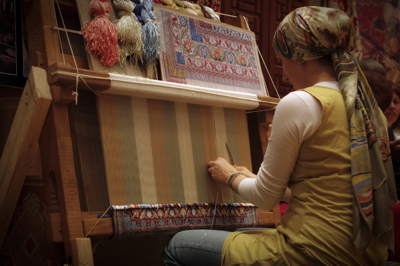 This rug was discovered under ice cover of Siberia in a grave of a prince, and thanks to freezing the rug survived for so long!

What is important is that it was rather sophisticated for that time, showing it was the product of a long history and tradition of weaving!

It has 250 knots per sq inch and can be seen in St. Petersburg's Hermitage museum.

In the 7th century AD, which is the time of the advent of Islam, the world of handwoven rugs had its biggest push - it flourished and branched out all over the Middle East.

In the 13th century Marco Polo travelled Anatolia and spread the fame of Turkish oriental rugs throughout the world in his scripts.

How did oriental rugs come to Europe?

It was the Crusaders who introduced rugs to Europeans in the 15th century. They became sought after by an affluent class, and merchants of Florence and Genoa had their hands full!

Here's another short video story about how oriental rugs came to Europe and became a status symbol:

They were tremendously expensive and very rare. In France, the purchase of those rugs was so heavy that it affected French economy! It was so serious that Henry IV started a carpet factory in Louvres to produce the carpets for the French market.

Very few of these imported rugs have survived to today, but they can be seen in paintings of famous Italian, French, Dutch and Flemish painters.

Old mastes like Holbein, Memling and Van Eyck used to place rugs under the Virgin Mary's feet or as table coverings in their painting! That's how they can be studied today. Interested in oriental rugs in artwork? Read about Islamic carpets in European paintings.

In the 16th century in Europe, these carpets were a matter of prestige: every aristocrat had his own collection! Catherine de Medici had her collection, Charles V has his, and there are also 60 Turkish carpets from that time in Hampton Court.

Venice was overflown with rugs at the time: Venetians spread Turkish oriental rugs along their narrow streets, hung the rugs from windows and used them to decorate Venice gondolas.

In the 17th century, the custom of covering floors with carpets became known to masses when the Turks left Vienna after their long and unsuccessful siege, and left many Turkish oriental rugs behind in their tents.

In Europe, the new fashion caught on quick and the demand for hand-knotted carpets from thesse areas dramatically increased...and it spurred European entrepreneurs to journey into the producing lands to commision the making of rugs for the European market.

In the 18th century there was a little slow down of production, but in the 19th century the Victorian era brought about their rise again.

From the 19th century, Turkish sultans started opening additional court workshops in Istanbul, as well as the village of Hereke, to meet the demand for these exquisite works of art, and that demand is still so today.

Hereke village was the first court carpet workshop and became famous for producing exceptionally large carpets fit to decorate Ottoman palaces. They also focused on silk carpets that were soon in great demand and received European acclaim. When you get to the Turkish rug demonstration with one of your daily Ephesus tours, ask the merchants to show you a Hereke! In this short video you can also learn how to tell a real Hereke rug from a Chinese copy!

Today, in Turkey, 750 villages and tribal areas are active producers of rugs. Each one of them still cherishes their own specific design, symbolism, size and colours that have been passed from mother to daughter for centuries.

What is significant about each Turkish rug?

If you put it into perspective, it's amazing to think that Turkish oriental rugs are older than anything you will see on your Mediterranean cruise: they had been made way before Ephesus had its golden days, way before the Athens Parthenon was built, way before Michelangelo painted the Sistine chapel or Columbus discovered America...taking one home is like taking a little part of the oldest European history with you.