Ancient Rhodes - a Brief History Part 1:
From Prehistoric times to
Alexander the Great

Ancient Rhodes - 5 minutes of reading this Rhodes Greece history travel guide will put things into perspective before your Mediterranean cruise.

Although some finds indicate that Ancient Rhodes has been inhabited since prehistoric times, there are not enough artifacts found for us to make any conclusions about that part of Rhodes history.

The first settlers we know more about were the Minoan Cretans (around the 16th Century BC) who established trading stations on the island.

The next chapter of Rhodes history is when the Mycenaeans came (around the 15th Century BC), who contrary to the Cretans, did not stay on the coastlines, but advanced more inland and fortified hills where they built their settlements. 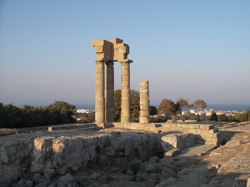 They were so prosperous that even the neighbouring peoples referred to them in their writings.

Pottery and jewelry from the tombs of this period of ancient Rhodes history can be seen today in the Rhodes archaeological museum.

As in the rest of Greece, the Dorians arrived around the 10th Century BC.

With the Doric colonization there was a lot of progress and development on ancient Rhodes. The Dorians brought their dialect, political organization, customs and traditions to both Rhodes and the rest of Greece.

The island was divided into 3 sections with each one having a main city. Those cities were:

The cities of Ialysos, Lindos and Kameiros (and Rhodos island in general) became a wealthy commercial centre of their time, so much so that these 3 Rhodes cities minted their own coins.

At this time, Rhodes was a great commercial center and thanks to its advantageous geographical position, it served as a staging post and a safe anchorage on the way to other markets all around the Mediterranean.

Economic prosperity was followed in the arts as well. Ceramics was one of the most common artifacts of the time, and typical Rhodian ceramic vessels are still discovered on all Mediterranean shores.

Another chapter in the history of Rhodes started with the Persian invasion. They captured the island prior to 480 BC. The Rhodians were made to fight for them against other Greeks but this did not last long, as the Persians were defeated by Athenian troops in 478 BC. Rhodes then joined the Athenian League.

When Athens went to war against Sparta in 431 BC, there are two accounts to the story:

1. the Rhodians switched sides and decided to support the Spartans.

2. they stayed a member of the Athenian League but remained neutral all through the Peloponnesian War. 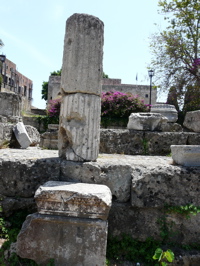 In 408 BC, Rhodes’ 3 main cities eventually came together to found a new city on the northern tip of the island – which is today's city of Rhodes.

The new city was built based on the ideals of ancient Greek architect and urban planner Hippodamus – the town had straight roads which crossed each other at right angles.

Today, some of the modern roads still coincide with those of the old Rhodes roads.

Ancient Rhodes town had a harbor zone with shipyards, a commercial zone, the acropolis and a residential zone.

It had all the usual features of a Greek city of those times: public buildings, temples, theaters… and it was adorned with many works of art.

At the time, Rhodes was so beautiful it was considered to be the most beautiful city in the world.

The ancient Rhodes Acropolis was much unlike the rest of the Greek Acropolises at the same time as it wasn’t fortified. It dominated the Western and highest part of the city and its buildings were built on stepped terraces supported by walls.

In the past the Rhodes Acropolis had sanctuaries, a huge temple premises, public buildings, underground cult places… but its whole Acropolis is yet to be excavated.

What can actually be seen today are the remains of:

Remains of the ancient Rhodes Temple of Aphrodite can be seen excavated close to the Eleftherias (Freedom) gate, on the edge of the old town of Rhodes.

Most of the buildings on the ancient Rhodes acropolis date back to Hellenistic and Late Hellenistic periods (3rd and 2nd Centuries BC).

Ancient Rhodes experienced a Golden Age in the 3rd Century BC and boasted many a famous artist, writer and philosopher.

In 357 BC, the island was conquered by the king of Caria in Western Anatolia (today’s Turkey), then captured by the Persians again in 340 BC. Their reign did not last very long as they were defeated again by Alexander the Great in 332 BC, making Rhodes part of his empire.