Colossus of Rhodes - one of the Seven Wonders of the World

"Colossus of Rhodes - brush up on your knowledge of this ancient Rhodes attraction before you cruise Europe!"

You are about to cruise to Rhodes and think you know absolutely nothing about Rhodes?

Well, how about The Colossus of Rhodes? Ring a bell? :)

Visiting Rhodes, you will be visiting one of the spots where one of the Seven Wonders of the Ancient World once stood. How exciting! And I'm sure you remember a thing or two about it from that long gone history class.

Talking about the Seven Wonders, do you remember what the other 6 were? Here’s a little help: the Temple of Artemis in Ephesus, the Gardens of Babylon, the Great Lighthouse of Pharos, the Mausoleum of Halicarnassus, the Great Pyramid of Gyza and the Statue of Zeus at Olympus. To refresh your knowledge of each one, visit the UnMuseum site. 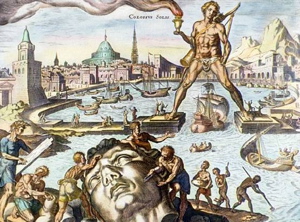 This famous gigantic statue of the Greek sun god Helios (protector of the city of Rhodes) was constructed with bronze, that was melted down, from the abandoned siege structures left behind when Rhodes managed to successfully fend off the attack of Demetrius and his 40 000 men.

Here's a few facts about the famous statue: the statue alone, made from large hand-hammered bronze plates fixed over an iron framework, stood 110 feet (approximately 33 meters) high, and was placed on top of a 50 foot pedestal made out of dazzling white marble.

Being such a huge undertaking for its day, according to the writings of Pliny, it took twelve years to build (304-292 BC). 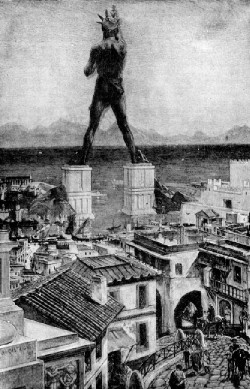 There have been so many depictions of this ancient figure. Some representations depict the statue standing over the harbor’s entrance holding a sword in its right hand and a spear in its left.

While others depict it simply standing with legs together holding up a torch much like the Statue of Liberty in New York’s harbor.

Although today we associate the word colossus mostly with the statue of Helios, it’s interesting that this word was used by the ancient Greeks and Romans to denote any larger than life or giant statue.

The Colossus of Rhodes stood up for about 56 years before it was destroyed in a massive earthquake that shook Rhodes to its core in 226 BC. Almost totally destroying the city of Rhodes too.

It lay in pieces for almost a millennium, and in fact it had become quite the tourist attraction of its day. Pliny the Elder, ancient historian, wrote:

“Even as it lies on the ground, it is still a marvel. Few men can make their arms meet around its thumb, and its fingers are larger than most statues. Where the limbs are broken asunder, vast caverns are seen yawning in the interior. Within it, too, are to be seen large masses of rock, by the weight of which the artist steadied it while erecting it.”

Ptolemy the Third did offer to pay for rebuilding it, but the Rhodians, as was the custom in those times, first consulted their oracle of Delphi, who told them that they had offended the god Helios and should leave it lying down.

So, fearing Helios, they declined Ptolemy of Egypt’s offer and left it in ruins.

Finally, in the 7th Century AD, the Arabs had conquered Rhodes and broke up the remains of the Colossus of Rhodes into smaller pieces selling its bronze and copper, worth quite a hefty amount at that time.

Although the most popular imagining of how/where the Colossus of Rhodes stood, is with one foot on either side of the harbor’s entrance (with ships literally sailing in through its pillar-like legs, and under its towering torso)… today, this is considered incorrect.

There are two theories about how the Colossus actually stood and its location:

Although today, absolutely nothing can be seen of the Colossus of Rhodes... wondering the streets of Rhodes, and stumbling upon stones of ancient temples like the temple of Aphrodite will take you back to those times…