How to Make Turkish Coffee

"How to Make Turkish Coffee - Turkish coffee has had an important role in Turkish lifestyle and culture since Ottoman times through to the present!"

If your idea of coffee is a watery brown liquid with lots of milk and artificial sweeteners in it, that you chug down out of big paper cups, you shouldn’t miss trying some real coffee in Kusadasi Turkey.

Importance of coffee in Turkish culture

Coffee has had an important role in Turkish lifestyle and culture since Ottoman times through to the present!

Arabica bean coffee was first introduced to Istanbul in the 16th Century and by the 17th Century it was consumed in large quantities in the Ottoman court.

The sultan would have special people whose job would be to make Turkish coffee for him, and those coffee makers had over 40 assistants!!! Making a coffee became a very important ceremony!

In harems, women would receive intensive training on the proper technique of how to make coffee. 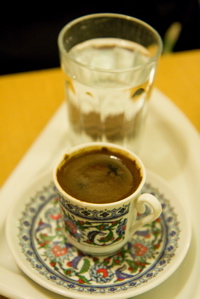 Mastery of this technique was very important because in ancient times, prospective husbands would judge a woman’s merits based on the taste of her coffee!

This tradition stays even today and prospective brides, as a test of their housekeeping skills, are still expected to make and serve coffee to the boy’s parents!

You think that’s conservative or unfair? Well, it actually works in their advantage sometimes…

If they don’t like the prospect, brides to be simply put some salt into the coffee instead of sugar, or spill coffee all over the guests!

First of all, it is made from very roughly ground powder.

Second, it's different in the way it is made: in a special little pot, boiled on fire. Electricity not needed.

Third, it is much stronger than American coffee because it is not diluted.

Moreover, it is enjoyed in small coffee cups, sitting down, talking to your friends and not in mugs or paper cups running around or driving.

How do you Make Turkish Coffee:

The Turkish way of preparing coffee is different from any other in the way that:

When you get your cup of coffee, you will notice that ground coffee settles on the bottom. You’re not supposed to drink that. Unless you want to stay awake for the rest of your Mediterranean cruise to party with your cruise director. ;)

Just like in the past, the ritual of coffee making, coffee drinking, and more than anything else, socializing over a cup of coffee, has a great importance in Turkish society!

It is over a cup of coffee that politics is discussed and catching up on the latest news and gossip is done.

Where to taste real authentic coffee in Turkey?

It is not rare that guests get offered a cup of real hot Turkish coffee at rug presentations that are part of the Kusadasi shore excursions and daily tours to Ephesus. So do make sure you accept the offer.

You will also get offered some real coffee if you sit down to shop for some jewelry or leather in any of the shops.

Turkish merchants are extremely welcoming, they like to get to know their customers, find out more about where you come from and do for living, so do not be surprised when they ask you to sit down and spend your time with them. They will happily make turkish coffee for you.

And it's always nicer to hang out over a cup of coffee or some raki, right?

Also, don't forget, a real Turkish coffee pot or cezve will be one of the nice Turkish souvenirs to buy in Kusadasi.

You will find it in the bazaar. Get one for yourself or your friends and family to make turksh coffee at home and remember your trip to Turkey.

You have heard it can get crazy out there in Turkish bazaars? It's true. As much as it is fun it can also be quite intense. That's why I suggest you let your private tour guides direct you to the best shops or even better, take you shopping with them.