"Pompeii Art – Learn about mosaics, frescos and sculpture in Pompeii home ruins, hidden from the world after the Vesuvius Volcano eruption..."

Besides showing us what everyday life of the ancient Romans was in the 1st Ct AD, the ancient city Pompeii is also famous for Pompeii art and being one of the best sites to explore the art of Roman times in general.

The lost city of Pompeii was where wealthy traders, ship captains, and bankers lived.

Just outside the walls of Pompeii and around Herculaneum was where elite Romans built their lavish seaside homes following the example of Julius Caesar and the emperors Nero, Claudius and Caligula who owned houses in the nearby Baiae. August and Tiberius had villas in Capri Italy while Cicero, Virgil and Pliny had residences in the bay area too.

Two millennia ago, Pompeii was something like what the Hamptons are today for New Yorkers.

In their Pompeii retreats, the wealthy crowds could relax away from the bustle of the big city. But one thing they could not leave behind was their sophisticated taste and the need to be surrounded with luxury. 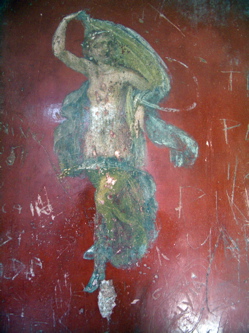 Even though most of the Pompeii art has been moved to the Naples Archaeological Museum, as you walk through Pompeii ruins and Pompeii homes today, you can get a nice surprise round every corner: a flash of the famous Pompeii red here, a wall covered with a beautiful Pompeii fresco there, your feet walking over black and white Pompeii mosaics…

It’s interesting to note, that Romans of good taste were big fans of Greek art and culture… and it really showed in Pompeii art. When Pompeii citizens commissioned art, they often asked for artwork inspired by Greek antiquities: frescoes showing scenes from Greek literature and mythology, portraits of Greek poets, playwrights and philosophers, marble statues that emulated Greek art of the Hellenistic era…

Even what’s left over of Pompeii art will delight you, let alone imagining what it must have been like 2000 years ago when these Pompeii homes were full of fine artefacts, bronze statues, silver tableware, fine glass, ceramics, deities figurines…

It seemed at first that all these wonders of Pompeii art were ‘lost’ from humanity for nearly 1700 years after the catastrophic Vesuvius Volcano eruption.

But today we know that the layers of volcanic ash and pumice stones, instead of destroying it all, actually kept everything intact and protected for many centuries.

The lost city of Pompeii is one of the few precious sources of what we know about ancient painting and decoration. Namely, the Roman civilization has not provided a lot of fresco paintings since they are more subject to damage than sculpture or architecture.

You can find out more about it in our article Pompeii Fresco Paintings.

In Pompeii, mosaics were widely used in house decoration. Just as Roman mosaic art in general, this art form had various stages of development. Find out more about it and what the most famous mosaics are in our article Pompeii Mosaics. 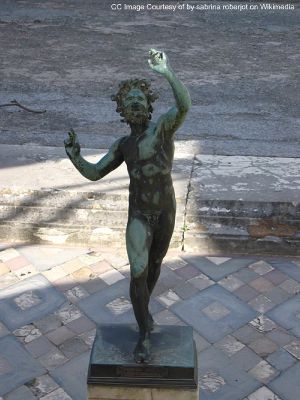 Many a Pompeii home’s rooms, peristyle gardens, atria and fountains were decorated with statues. And so were the open squares and public buildings.

Those sculptures from Pompeii that did survive the Pompeii destruction, show us that statues of a small size were preferred in Pompeii.

Large statues, those of the commemorative type, decorated the Pompeii Forum.

When people of Pompeii walked their main square, on both sides they could see statues of the emperors and the imperial family as well as the worthy citizens of Pompeii from both the past and their times.

There were some commemorative statues also placed in the Forum Triangulare, in the portico of Macellum, portico of Eumachia as well as the sanctuary of the City Lares.

Many Pompeii homes were decorated with sculptured portraits of their owners and family members but also heads and busts of famous men of the past: poets, philosophers and statesmen.

Some of the most noted Pompeii sculpture pieces you can see in the Archaeological Museum of Naples today are: