"Today, the Athens Parthenon, although stripped of most of its decoration, still leaves a lasting impact on every soul...

Rightfully considered the greatest monument of Ancient Greek architecture, seeing the Parthenon is the highlight of every cruiser’s visit to the Athens Acropolis.

Whether you get there by taxi, one of the cruise line organized tours or by simply taking Athens train from Piraeus, seeing the Athens Parthenon is a must.

This impressive temple got its name from the Athena goddess, the patron of Athens, and one of her many attributes, Parthenos, which means Virgin or Maiden.

The construction of the Athens Parthenon began in 447 BC, and it was completed in 438 BC. The architects responsible for designing this building, that is the most copied structure in the world ever, are Ictinus and Callicrates.

Athens Parthenon was built as thanks to Athena goddess for the triumph of Athens over the Persians. And rest assured, Athenians (led by their legendary statesman Pericles) couldn’t have thought of a more lavish way to please their patron... 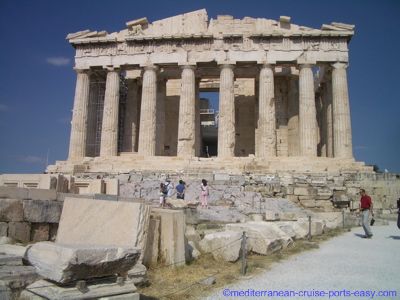 Namely, inside the most sacred room, the cella, they put a gigantic sculpture of Athena Parthenos, sculpted by Phidias himself. But it’s not only its size that must have flattered the goddess!

Check here for a clickable plan of Parthenon and try to find a click that will give you the view of the sculpture inside the temple!

This 12m (40 feet) tall sculpture must literally have been blinding with all the gold, silver and ivory it was clad in. Only the gold weighed 2,500 pounds (1,100 kg). Now how’s that for demonstration of a state’s power?

To see what the sculpture must have looked like, check this reconstruction drawing of Athena Parthenos!

If you’re wondering where all that gold’s gone, the sculpture of Athena Parthenos was looted in the 5th Ct. and taken to Constantinople where it was finally destroyed by Crusaders in 1204.

That was inside the temple. As for the exterior… you have to at least try and imagine what it looked like when the bas relief frieze depicting the Panathenaic procession in honour of Athena goddess still decorated the outside walls of the cella; when the 92 metopes (rectangular plaques) showing battles of the mythological creatures still stood on the outside frieze; when the stories of Athena’s life still adorned the pediments.

And all of that in colour! Yes, you heard right, although today we imagine the Athens Parthenon as a monochromatic marble structure… in the past, those sculptures were painted in bright paint!

The main person in charge was Phidias who was helped by more than 70 assistant sculptors.

Visible from every corner of ancient Athens, it was hard not to glance at the Athens Parthenon every now and then and be reminded of the state’s power. It was the mirror of Athenian’s high opinion of themselves.

Having stood up there on the Athens Acropolis for more than 2500 years, if it could, the Parthenon would write a best-seller autobiography: the Emperor Theodosius turned it into a Christian Church dedicated to the Virgin Mary; the Franks into their church (1204) and the Turks into a Mosque (1458).

Only a minaret was added to the Parthenon, but other than that it was not damaged further. European visitors in the 17th Century testified that the building was largely intact. 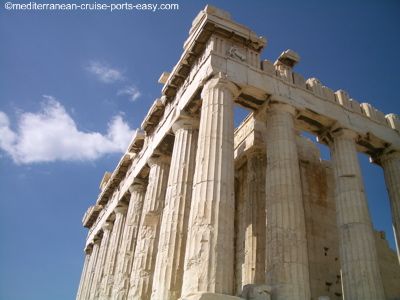 In 1687, while the Turks were using it as a powder magazine, it got hit by a Venetian grenade which blew its roof off and reduced this masterpiece of Greek art and architecture to a mere skeleton.

From 1801 to 1812, Lord Elgin, a British ambassador at Constantinople, removed half of the surviving sculptures off the Parthenon and sold them to the British Government. Still to this day they can be seen in the British Museum in London.

Today, the Parthenon, although stripped of most of its decoration, still leaves a lasting impact on every soul for its impressive setting, the harmony based on the golden section, and the message it holds behind its physical appearance: this temple was an ode to the glory of one powerful civilization and its achievements in warfare, democracy, architecture and philosophy.

Being one of the most important archaeological sites in the world, Athens does deserve to be seen accompanied by a certified tour guide. So make sure to check the options below. Combined with a taxi transfer, train or a hop-on-hop-off bus to get there, they make a welcome option to expensive shore-excursions offered by your cruise line.

Powered by GetYourGuide. Become a partner.