Why Taking Ephesus
Shore Excursions is a Must

"Ephesus shore excursions: where every single soul on the ship should be on the morning of your visit to Kusadasi is... visiting Ephesus ruins!"

When you find out your Mediterranean cruise ship will be calling to the port of Kusadasi Turkey, congratulate yourself on a good choice of itinerary and then start planning your Ephesus shore excursions or booking independent daily Ephesus tours.

What used to be an antique town of 250,000 citizens is today one of the biggest archeological sites in the world and is an absolute must see when coming to this part of the world, even if you think you've seen your share of ruins.

I first visited Ephesus in 2005 as part of my job back then, the Port and Shopping guide onboard the RC's Legend of the seas. By then I had seen many ports, done many tours and ruins were no news to me as I freshly graduated Archaeology at the University of Zadar, Croatia.

But seeing Ephesus I thought to myself: I need to tell my passengers about this place. I really need to drive home the fact they need to make an effort to go out and see Ephesus when in the port of Kusadasi. 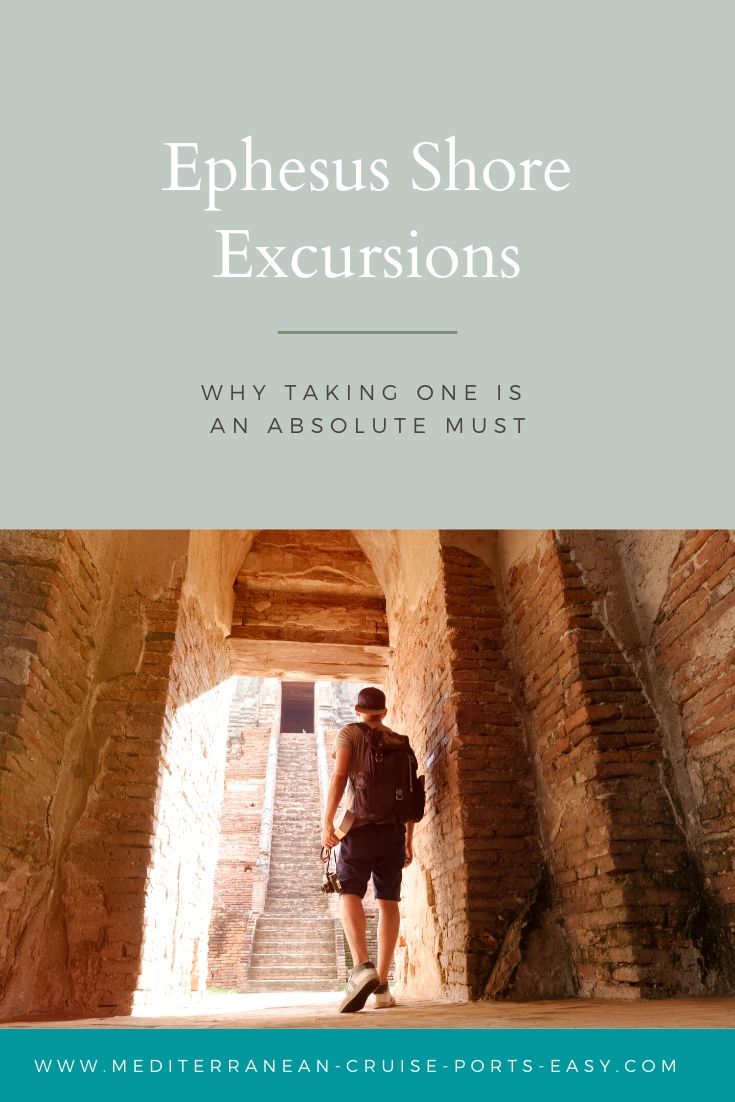 Where is Ephesus located?

One of the interesting facts about Ephesus, that you will learn on one of your Ephesus shore excursions, is that although today it is some 8 km inland, 2000 years ago it used to be a city with a big harbour. Only later did the port get silted, which contributed to the decline of the city.

Today, Ephesus is located some 3 kilometers (1.8 miles) away from Selcuk, Izmir and some 19 kilometers (11.8) away from the port of Kusadasi which is where your cruise ship will dock. 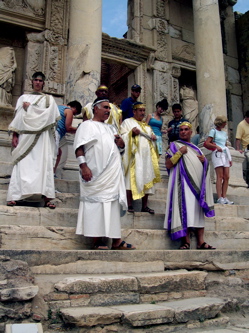 It is amazing to think that walking around the site, you will be walking one of the greatest cities in the classical Mediterranean world and one of the best preserved.

As I've already mentioned, if you think ruins are all just the same and once you've seen a few you've seen them all, you might miss seeing a place that has such importance for the western culture in so many ways.

It’s amazing to think that at one point, in its Golden age, it had over a quarter of a million citizens!

Here's  top five reasons why you should visit Ephesus and what makes it different from other ruins:

1) Its age: it was first built by Greek Ionian settlers in the 10th century BC and that was on the site of an even older prominent Anatolian city.

2) It has more layers: Ephesus as we see it today lasted from the 4th centruy BC to 1500 AD. From the period of the Greek migrations (still visible in the remains of the Temple of Artemis), Archaic, Classical, Hellenistic, Roman period to the Byzantine and Ottoman era - with help of a good tour guide, Ephesus will unrevel all its layers right in front of your eyes.

3) It's importnace: Ancient Ephesus used to be one of the greatest cities of Greeks in Asia Minor (it was its capital at least twice), the chief commercial hot spot of the province and the centre of worship for fertility goddess, Artemis of Ephesus.

It flourished even more in Roman times when it had most inhabitants, as well as Byzantine era when it was the most important city of the Empire after the Constantinople.

When you walk the main street, the Arcadian Way, you will be walking the same marble that the feet of many historical people walked.

Alexandre the Great, Julius Caesar, Cicero, Strabo, Marc Anthony and Cleopatra - these are just some of the names that make the who-is-who list of the ancient world and that all visited this fascinating city.

4) Importance for early Christianity - it was in Ephesus that apostle Paul taught and preached to his disciples; St John wrote the Bible’s fourth Gospel here and died here, which was commemorated with the Basilica of St. John.

The blessed Virgin Mary, spent her last days here too, in a small house in the hills and you will get a chance to see it on one of the daily Ephesus tours.

Are you intrigued now and would like to find out more about Ephesus before visiting? Here's a great documentary...

Why is it so important to take one of the Ephesus shore excursions?

The archaeological site of Ephesus is one of the major tourist attractions not just in the area but in the Mediterranean in general, so coming all the way here and not making an effort to get there would be such a shame, by now you understand that.

However, many people ask me: Is it possible to self-guide in Ephesus? Should I DIY in Ephesus? Are you allowed to visit the site without the tour guide?

Yes, you can see it by yourself. Yes, you are allowed to do that. However, one of the best tips I will give you on this whole website is: this is NOT the day you should save money by not affording to visit Ephesus with a tour guide!

When you check reviews of some of the hand picked Ephesus shore excursions below, you will see that all the previous cruisers are raving about their tour guides as THE best part of their visit to Ephesus.

Being a tour guide is one of the most reputable professions in Turkey, country of such rich history, and to become one you must really invest in your knowledge (the all have degree in history, archaeology or art and are extremelly fluent in foreign languages).

Besides, Turkish people are some of the most hospitable in the world and you will feel as if you were visiting your turkish cousin.

Have a special wish after the tour? Want to go Kusadasi shopping? Taste the best food in Kusadasi? They will do anything to make you happy!

In short, going to Ephesus without a tour guide, you will not only end up not getting the whole picture of this multi-layered city but also fall short of knowing so much about the culture and people of Turkey. 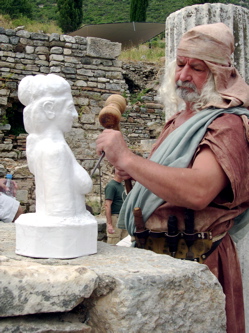 Life at Ephesus 2000 years ago

Kusadasi shopping is great, that’s true, you will have a blast getting your Turkish rug and your Turkish leather here, but where every single soul on the ship should be on the morning of your visit to Kusadasi is visiting Ephesus ruins. And shopping is no reason to skip sightseeing. There's enough time for everything.

What do I get to see as part of the Ephesus shore excursions?

Besides the regular public buildings that every Roman or Greek city contained… the theatre, the odeon, state agora, monuments to the Emperors… there is also a few unusual and not so holy monuments you will have a chance to see.

First, the public latrines, which were an important spot for socializing… men would come here to talk politics or to catch up on reading. It is interesting that their slaves used to sit on them first to warm them up!

Secondly, Ephesus shore excursions guests are always amazed to see one of the first advertisements in history here too. And it is nonetheless an advert for a brothel! A head of a woman, a heart and a foot carved in the sidewalk stone, showing the direction!

Read more about these two Ephesus attractions in our article Ephesus ruins.

These may be curiosities to show photos of to friends back home, but the real show stoppers are The Celsus Library, the Grand Theatre, the Temple of Hadrian and other Ephesus ruins that will be part of your Ephesus sight seeing.

You get the point, right? Whether taking one of the cruise line organized shore trips or booking one privately online, taking one of the Ephesus shore excursions is a must and will be one of the highlights of your Mediterranean cruise vacation!

What are the best Ephesus shore excursions?

First of all, the best shore excursions are those that are booked through a reputable provider or tour operator.

You can't go wrong either booking your tour through your cruise line (they do sell out quickly) or online, through a tested provider like Viator.

Which is better? Should you book a cruise line provided tour or book one independently? That is one of the most common questions by cruise travelers.

In short, in the past the advantage of the cruise provided shore excursions used to be the fact they would get you back to the ship in time for the sail away. If the tour was late, the ship would wait for the passengers.

Today, tour operators that don't work directly with the cruise line have perfected their operations so much the risk of not getting back in time is very, very low. Especially in the port like Kusadasi where Ephesus is mere 19km away from the cruise port.

Here'a great article at Cruise Critics that will help you decide whether you should book one of the cruise line provided tours or book independently.

If you want better choice of tours at lower price points, some personal attention, more in-depth info and a tour tailored to suit your needs, check out the best Ephesus tours directly on Viator's pages (starting from only $35) or see the ones we hand picked for you in the article Daily Ephesus tours.

And please, don’t forget that although it is possible to get to Ephesus by taxi or local bus, which we explained in our article Ephesus travel, this is not one of the days we suggest going sightseeing without a good professional guide. If there is one day during your whole cruise that you’re going to take an organized tour of some kind, it should be for Ephesus!