Artemis of Ephesus - Inspiration for the Temple of Artemis at Ephesus

"Artemis of Ephesus was revered more as a Great Mother Goddess..."

Judging by the number of the goddes Artemis statues, figurines and coins found all over the Greek mainland, Greek colonies and later on in the whole Roman empire, Artemis was the most influential and deeply rooted female divinity in the whole Mediterranean area.

Worshipping Artemis was of special importance in the city of Ephesus, the remains of which are the most important sight to see while cruising to the eastern Mediterranean and the port of Kusadasi, Turkey.

Let's see what made this Greek goddess the superstar divinity of Anatolia and its biggest city, Ephesus, home of the temple of Artemis, one of the 7 Wonders of the Ancient World. 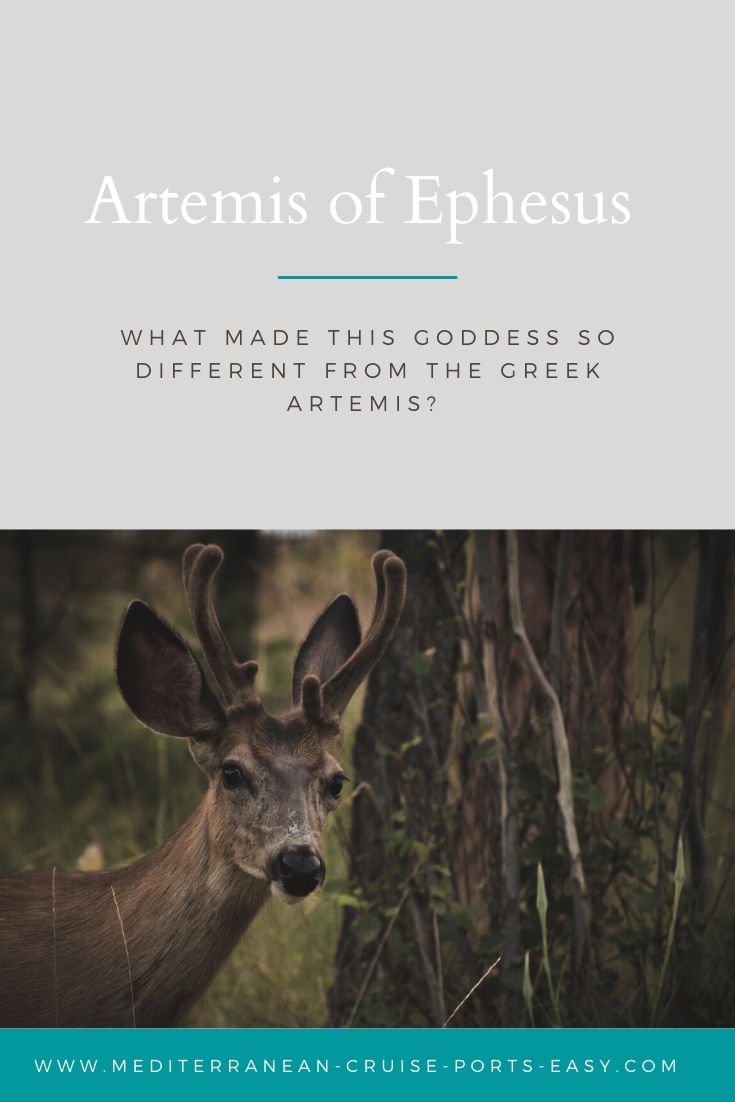 Share Artemis of Ephesus info with your fellow cruisers

Who is the goddess Artemis?

Greek Artemis was Apollo's twin sister and the daughter of Leto and Zeus, born on the island of Delos. She was one of the three main goddesses of Olympus and was usually depicted carrying arches in a quiver, dressed in heavy robes and haing a deer by her side.

Although in mainland Greece Artemis was worshipped as the virgin goddess of wilderness, the hunt, wild animals and fertility… in Asia Minor, where Ephesus was located, people had a slightly different idea of the goddess. 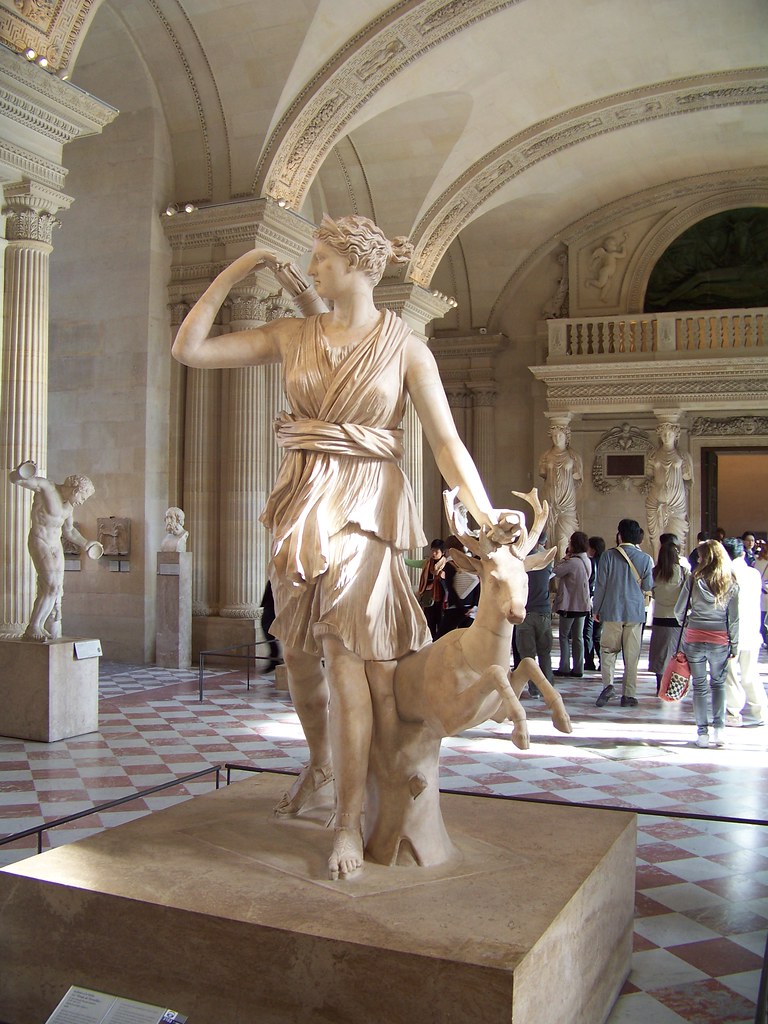 "Artemis with a Stag" by rjhuttondfw is licensed under CC BY 2.0

What were the features of the Ephesian Artemis?

Ephesian Artemis was revered more as a Great Mother Goddess. Namely, Greeks would often assimilate foreign gods’ features with one of the Gods familiar to them from the Olympic Pantheon.

In the case of Artemis of Ephesus, she was most probably an indigenous Anatolian goddess that Ionian settlers accepted and named after the goddess they knew well.

Ephesians even changed her birthplace: their Artemis was born in a grove in the nearby Ortygia.

In Hellenistic times, the goddess that influenced the features of Artemis was Cybele, mother goddess of the East.

Later on, in Roman times, she took features and merged with the Roman goddess Diana.

Artemis of the Ephesians was presented completely different to the Greek Artemis.

Eastern and Egyptian influences of Artemis can be seen in the way she was portrayed in the sculpture that can be seen at the Ephesus Museum: she is wearing a model of her temple on her head, on her breast a garland of flowers, lions clinging to her arms, as she’s the mother of wild beasts.

Her legs are closely bandaged (resemblig a mummy) and ornamented with figures of bulls, stags, lions, griffins, flowers and bees.

The most interesting part of her statue is the many breasts or eggs hanging from her chest. Some even say these may be scrotal sacs from the bulls sacrificed in her honour.

At any rate, it is agreed they accentuate the aspect of fertility in this deity.

For more info on Artemis birth, attributes, legends and rituals check the article on Artemis by Melissa Coffey.

Even better, if you like listening to podcasts and got time on your hands, dive into this one. The intro is very long and tells you about the author of the book himself. If you want to skip that, jump to the 21st minute. It will give you a really deep understanding of what Artemis meant to Ephsians.

Where can you see the statue of Artemis of Ephesus?

According to some historians, over 600 statues and figurines of the Ephesian Artemis were found in all parts of the Roman Empire.

They were copies of the original statues of the Artemis of Ephesus that were once placed inside the Temple of Artemis.

Two beautiful statues of goddess can be seen in the Museum of Ephesus in Selcuk, a town just a few away from the archeological site of Ephesus.

They are both made relatively late, in Roman times, and are copies of the original cult statues from the temple.

A beautiful black Artemis, also a sculpture that dates back to Roman times, can be seen in the National Museum of Archeology in Naples, Italy.

Many other remains from Ephesus and the temple of Artemis can be seen at the British Museum in London, UK. 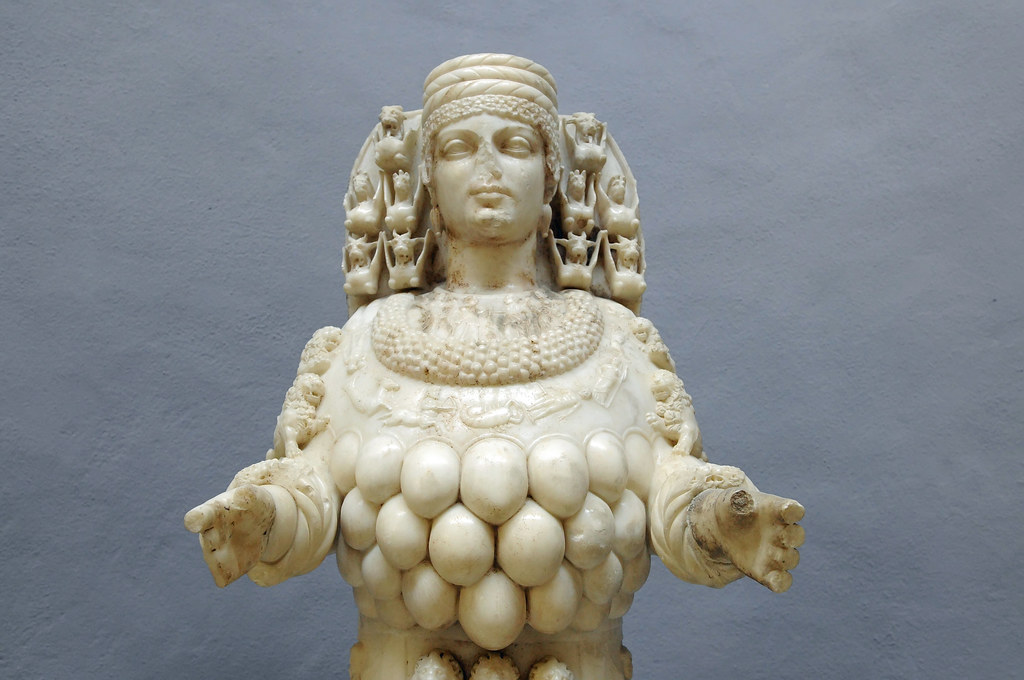 "Ephesian Artemis 2" by Son of Groucho is licensed under CC BY 2.0

What is the best way to see the temple of Artemis in Ephesus?

If you are looking for a tour to visit Artemision, the temple of Artemis in Ehesus, which was once one of the Seven Wonders of The World, we have hand picked the best and highest rated tours for you:

With half a dozen ships docking in Ephesus every day, tours do get sold quickly. Considering they are either private or small group tours, book quickly to avoid any disappointments.