"Visiting Ephesus ruins is an absolute must for every Mediterranean cruiser visiting Kusadasi Turkey..."

To see and experience the Ephesus ruins is like travelling back in time.

You won’t need much imagination to really picture the way life used to be for Greeks and Romans a few millennia back when you walk the same pavements, look at the same facades, peek into their houses, sit in the same theatre they used to.

That is what’s so exciting about visiting this ancient city and why we say coming here is an absolute must for every Mediterranean cruiser when docking in Kusadasi harbour.

Ephesus travel and getting there isn’t difficult, but no matter how you get there make sure you have a professional tour guide!

You could easily spend a few days exploring the Ephesus ruins by yourself and we know that as a cruise guest, you don’t have that much time. That’s why a good guide will direct you to the most important attractions and most importantly, put them into perspective for you!

Here’s a list of some of the most attractive sights in and around the ruins of Ephesus, so you get an idea of what you will be seeing:

1. Ephesus ruins: The Varius Baths - One of the largest baths in the city, they date to the 1st Ct A.D. Note the “hypocaust” system for floor heating, some kind of Roman-time central heating.

2. Ephesus ruins: The Temple of Artemis/Artemision -Unfortunately, today only one pillar remains of this once magnificent structure and one of the Seven Wonders of the ancient World. You can find out more about this ancient temple in our article The temple of Artemis at Ephesus.

3. Ephesus ruins: The Church of St. John/Basilica of St. John - This basilica is located some 3,5 km (2 miles) from Ephesus, on a hill near Selcuk. It has been built over the believed burial site of St. John, the author of the Gospel of John and the Revelations.

St. John came to the city in 42 A.D., together with Virgin Mary, to spread the word of Christianity.

In the 4th Ct, St. John’s grave was indicated with a small church with a wooden roof. It was only in the 6th Ct that Emperor Justinian built a magnificent basilica with a dome to mark the location of the Saint’s grave.

4. Ephesus ruins: Odeum - Looking like a small theatre, this structure was built in the 2nd Ct A.D. This was where the members of the city council met the Curetes to decide on the future of the city. Its second function was for concert performances. It could seat up to 15000 people.

5. Ephesus ruins: The Temple of Domitian - Built in the 1st Ct A.D., this was probably the first building built in the name of an Emperor. Fragments of Domitian’s statue were found here and are now in the Ephesus museum. 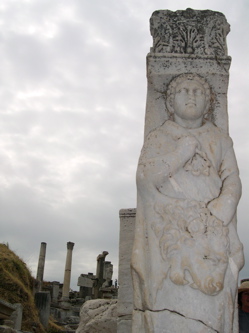 6. Ephesus ruins: The Heracles Gate - This gate was brought here from an older building at the end of the 4th Ct A.D. but was actually built in the 2nd Ct. Located at the end of the Curetes street, it got its name after the relief of Hercules with the skin of a Nemean lion.

7. Ephesus ruins: The Curetes Street - This was one of the three main streets, stretching between the Hercules gate and the Celsus Library. It was named after the Roman-time priests dealing both with religious and state affairs. The appearance of the street you can see today dates back to the 4th Ct A.D. The street was flanked by statues of famous Ephesians, fountains, stores and colonnades.

8. Ephesus ruins: The Trajan Fountain - Built in the name of Emperor Trajan, at the beginning of the 2nd Ct A.D. There was a big statue of Trajan overlooking the pool, but only a foot remains from it today. 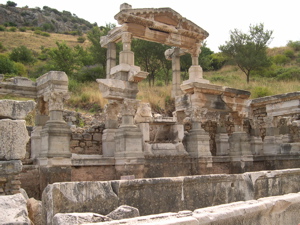 Around the pool there were columns and statues of Dionisus, Aphrodite, Satyr and the family of the Emperor. Some of them are kept in the British Museum and others in the Ephesus Museum.

9. Ephesus ruins: The Scholastica Baths - Like the other typical Roman baths, these have four divisions too. They were built at the end of the 1st and the beginning of the 2nd Ct A.D. They were named after the rich Christian lady Scholastica who renovated them in the 4th Ct A.D.

10. The Temple of Hadrian - Built in honour of the Roman Emperor Hadrian in the 2nd Ct A.D., this is one of the most beautiful structures on Curetes street. You will recognize it by 4 Corinthian columns supporting a curved arch in the middle of which is a relief of the goddess of victory, Tyche. There are beautiful reliefs on both sides of the building. 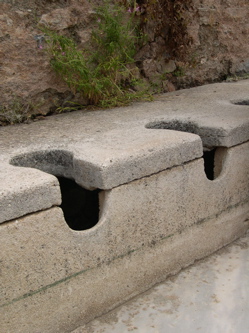 11. Public Latrines - This tourist attraction of Ephesus was part of the Scholastica baths and dates to the 1st Ct A.D.

They were the actual public toilets of the city and still today you can see the U-shaped toilet openings aligned along the wall. It could accommodate up to 50 people at a time!

12. The Houses on the Slopes/Terrace houses - These houses located on the slopes of a hill opposite Hadrian’s temple were the houses of the rich Ephesians. Most of them date back to the 1st Ct A.D. They give us some valuable information of family life between the 1st and the 7th Ct A.D. when they were used. You will have a chance to see some floor mosaics and frescoes here, as well as the “hypocaust” system of floor heating.

Entrance fee for the Houses on the slopes: 15 Turkish Lira, which is approx. US $10.

13. The Brothel - This structure consists of a number of rooms and halls around an atrium. A baked clay statue of God Bes with a huge phallus was found here. 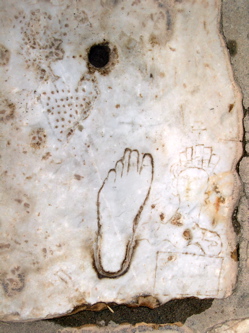 14. The Celsus Library - Dedicated to the General Governor of the Asian Province, Tiberius Julius Celsus, this Ephesus library is one of the most beautiful structures in Ephesus.

It has a recognizable, two-storey façade with Corinthian style columns, restored between 1970 and 1978. That’s when the original statues of the four virtues (wisdom, knowledge, intelligence and valor) were replaced with the replicas you see standing in the niches today.

There were over 12000 scrolls kept here in cupboards in niches on the walls.

You can read about it more in our article Ephesus Library.

15. The State Agora - Built during the reign of Emperor Augustus and Claudius (1st Ct A.D). This agora wasn’t used for commerce but is where the religious and state meetings were held. There was a temple of Isis in its center.

16. The Marble Road - Stretched between the Celsus Library and the Great theatre, the road was first constructed in the 1st Ct A.D. and then renovated in the Hellenistic period.

It was flanked with stoas serving as pedestrian sidewalks. It is on this road that the advert for the brothel can be seen.

17. The Grand Theatre - The grandiose structure of the Ephesus theatre was first constructed in the Hellenistic Period, in the 3rd Ct B.C., but it was enlarged in the 1st Ct A.D. It could seat up to 25 000 spectators. It was used for religious, philosophical and political discussions as well as animal and gladiator fights.

18. The Theatre Gymnasium - This is one of the complexes in Ephesus that was used for bathing and exercise. It was mainly used by the theatre players, and that’s where its name comes from.

19. Arcadian way – The Harbour Street - This street extends between the Grand theatre and the harbour. Coming from the port, it would be the first thing visitors would see, so it was lavishly decorated with marble and colonnades.

There are two monumental porticoes on both ends of the street. In the 6th Ct there were four big columns placed on this street holding the statues of the four apostles.

It is named after Emperor Arcadius.

20. The cave of the seven sleepers - According to Christian legend, in this grotto on Mount Pion near Ephesus, is where seven young men, who were prosecuted by emperor Decius in the 3rd Ct A.D., were walled in.

Three centuries later, the mouth of the cave was sealed off and the men were found inside… sleeping!

21. The House of the Virgin Mary - This site is hidden in the green of a mountain slope, some 9km away from Ephesus. Virgin Mary is said to have come to Ephesus with St. John to spread the word of Christianity. This used to be a typical Roman house, which was later built into a shrine. There are fountains by the house that are believed to have healing properties.

Hotels in Kusadasi - Planning to stay in Kusadasi to explore Ephesus even more? HotelsCombined.com allows you to instantly search and compare room availability and prices from all major travel websites!

Magical Steps Travel - this is a five star private tour provider for Kusadasi and Istanbul. Check out why they have a 100% guests' satisfaction guarantee and Trip Advisor's certificate of excellence for many years in a row now. 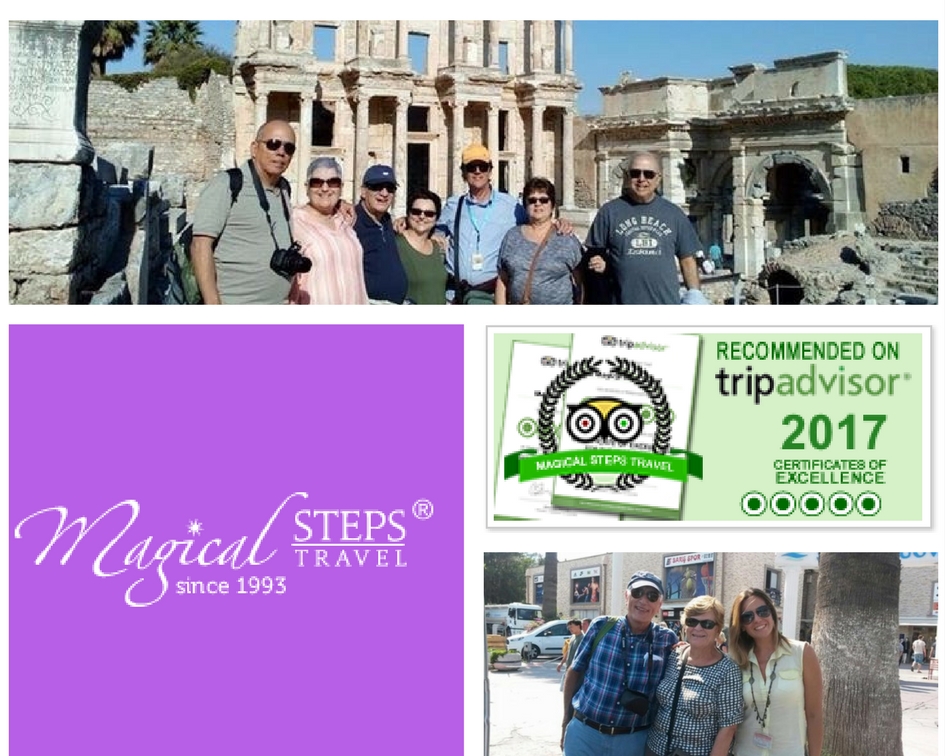